[This is part 6 of a series, which begins here.]

When forces are “weak”, in the technical sense, calculations can generally be done by a method of successive approximation (called “perturbation theory”).  When forces are very “strong”, however, this method doesn’t work. Specifically, for processes involving the strong nuclear force, in which the distances involved are larger than a proton and the energies smaller than the mass-energy of a proton, some other method is needed.  (See Figure 1 of Part 5.)

One class of methods involves directly simulating, using a computer, the behavior of the quantum field theory equations for the strong nuclear force. More precisely, we simulate in a simplified version of the real world, the imaginary world shown in Figure 1 below, where

(See Figure 4 of Part 4 for more details.)  This makes the calculations a lot simpler.  And their results allow us, for instance, to understand why quarks and anti-quarks and gluons form the more complex particles called hadrons, of which protons and neutrons are just a couple of examples. Unfortunately, computer simulations still are nowhere near powerful enough for the calculation of some of the most interesting processes in nature… and won’t be for a long time. 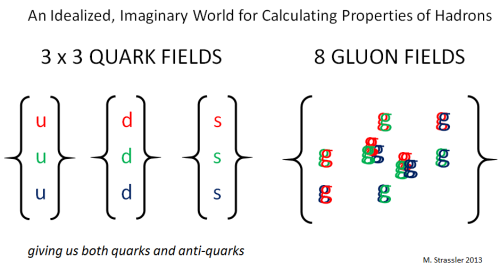 Fig 1: The idealized, imaginary world whose quantum field theory is used to make computer simulations of the real-world strong-nuclear force.

Another method I mentioned involves the use of an effective quantum field theory which describes the “objects” that the original theory produces at low energy. But that only works if you know what those objects are; in the real world [and the similar imaginary world of Figure 1] we know from experiment that those objects are pions and other low-mass hadrons, but generally we don’t know what they are.

This brings us to today’s story.  Our success with the Standard Model might give you the impression that we basically understand quantum field theory and how to make predictions using it, with a few exceptions. But this would be far, far from the truth. As far as we can tell, much (if not most) of quantum field theory remains deeply mysterious.

Is this merely an academic problem of no interest for the real world? That is partly a question of whether any of these poorly understood quantum field theories actually is playing a role in particle physics… which is something we may not know until we complete our study of nature many centuries hence. But at a certain level, we already know the answer is “no, it’s not academic”. Theories of a similar type have a role to play in  “condensed matter” physics, and if we understood quantum field theory thoroughly, it might allow for a number of the most difficult puzzles in that subject to be resolved.

To illustrate some of the issues, I’m going to give you some examples of imaginary worlds described by quantum field theories that don’t appear in the Standard Model, and tell you something of what we do and don’t know about them.

First, let’s talk about a case very similar to the imaginary world of Figure 1.  The only difference is that instead of having three “flavors” of low-mass quarks — up, down and strange — imagine a world that has eight. Or seven.  Or nine.  What happens in such a world?  What do the equations of the corresponding quantum field theory predict?

Fig. 2: A world similar to the one in Figure 1 for which computer simulations are much more difficult and the behavior of the theory at long distances and low energies is not currently known.

Does this imaginary world behave much like the real world, with proton-like and neutron-like objects, and pion-like objects that become massless when the quarks are massless? Or does this theory have the property that, when the quarks are massless, it is scale-invariant, a feature I described in the second post in this series? As the quark masses are reduced to zero, does the proton mass in such a world remain substantial, or does it drop to zero too? Are there other features that are very different from the real world? Is there a simple effective quantum field theory that describes how this world behaves at long distances and low energies?

We can probably figure this case out, perhaps in the next few years, using computer simulations; armed with recent advances in both computer technology and in simulation techniques, people are already trying. We can certainly simulate the case where the quark masses are relatively big, and then, step by step, lower the quark masses. Each step makes the calculation harder and more unstable, but we can gain insights into what is happening as the quark masses go to zero by looking at how the theory changes — and particular, how the masses of the hadrons change — when the quark masses are gradually reduced. Some of my friends with very big computers are working hard to figure this out, but despite 15 years of effort, we still don’t have clear answers… yet.

More generally, we can consider similar imaginary worlds where the number of colors is any integer N > 1, and where the number of types of quarks (with N colors each) is any integer Q > 0.  The equations for all these theories are similar, but their behavior can be quite different.  For a large class of these imaginary worlds (typically those with N>3 and Q between about 2N and 4N) almost nothing is known about their behavior. Except for N=2 and 3, there have been (to my knowledge) no attempts to run computer simulations.  So an enormous amount remains unknown, though potentially knowable, at least in part.

Here’s another imaginary world to think about. This one has something a little different. As I discussed in this article, quarks (as well as electrons and other matter particles in the Standard Model) are really made from two half-quarks, which I named quark-right and quark-left (the reason for the names is technical). So we can consider a theory that has seven quarks-left which carry color (and their anti-quarks-right that carry anti-color), and it has a single half-“sextet”-right which carries two colors (and an anti-sextet-left that carries two anti-colors.) It’s not obvious that this makes sense, but… trust me. This is called a “chiral” theory because the objects that carry color aren’t the mirror image of the things that carry anti-color.

Fig. 2: An imaginary world for which no computer simulations of the equations are possible; the important features of this world are unknown. Note that in the matrix at right, the greyed-out lower left triangle represents particles equivalent to those in the upper right triangle, meaning there are six independent particles in the brackets.

The key feature of such a theory is that these half-quarks and half-sextet particles can’t be given a mass; to give a mass to a quark-left, you need a quark-right, and similarly a sextet-right needs a sextet-left. And in this world, these partners are missing. So these particles have to remain massless.

How does this imaginary world behave? I don’t know, and worse, I don’t know how to find out. At sufficiently low energy and long distance, successive approximation won’t work in this imaginary world, anymore than it works for the real-world’s strong nuclear force. And computers can’t be used to do calculations, because the calculational techniques currently available simply don’t work when quarks (or other spin-1/2 particles) are massless. And finally, no one knows how to guess a suitable effective quantum field theory to describe the long-distance and low-energy behavior of this imaginary world; neither experiment nor computer simulation is available to give us a hint. It’s not even clear that an effective quantum field theory with nicely behaved equations exists at all. (We’ll see soon that there are cases where we know no such theory exists.)

[For some of these quantum field theories, we do know some relevant equations that could in principle, with careful adjustment, be used.  But often these equations are as hard as the ones described in the previous section, for which neither computer simulation nor successive approximation can work, so in practice the careful adjustment can’t be done, and no calculations are possible.]

How, you may rightly wonder, could we possibly even know that there are quantum field theories for which no useful equations can currently be written down? That is a story I’ll tell soon. For today, suffice it to say that we have no idea whether this set of theories is a tiny minority of quantum field theories, or the overwhelming majority. There simply aren’t any techniques to tell us the answer. Indications are that they are very common.   Still, without the equations, how can we hope to learn anything about them?

This is one place where supersymmetry — not in its potentially direct real-world application, as a means by which to address the naturalness problem of the Standard Model, but rather as a tool for studying the properties of otherwise incomprehensible imaginary worlds — comes into play.