[Apologies: due to a computer glitch, the figure in the original version of this post was not the most up-to-date, and had typos, now fixed.]

On Tuesday, the New York Times Editorial page ran an Op-Ed about dark matter… and although it could have been worse, it could certainly have been better.  I do wonder why these folks don’t just call up an expert and confirm that they’ve actually got it right, before they mislead the public and give scientists a combination of a few giggles and a headache.

Here is the last paragraph from the Times:

“This experiment is probing a major hole in the way we understand the cosmos. Roughly speaking, the force of gravity in the universe can be explained only by a corresponding amount of mass, or matter. Some undiscovered mass — dark matter — must exist in order to explain gravity, but no one has seen any traces of it. Those traces, when they are finally found, will be exotic particles left over from the Big Bang. In the tale we tell about everything we know, scientists have now brought us to the edge of the deep, dark woods. They, and we, are waiting eagerly to see how the rest of the story goes.”

First, a relatively minor point of order. “…the force of gravity in the universe can be explained only by a corresponding amount of mass, or matter…” This isn’t great writing, because mass and matter are not the same thing. Matter is a type of substance. Mass is a property that substance (including ordinary matter, such as tables and planets) can have. Mass and matter are as different as apples and applets. You can read about these distinctions here, if you like. The author is trying to evade this distinction to keep things simple: the more correct statement is that gravity (in simple circumstances) is a force exerted by things (including ordinary matter) that have mass.

But here’s the real offending remark: “Some undiscovered mass — dark matter — must exist in order to explain gravity, but no one has seen any traces of it.” Dark matter is most certainly not needed to “explain gravity” in some general way; there’s not one bit of truth in that remark. For instance, the gravitational pull of the sun on the earth (and vice versa), and the pull of the earth on you and me (and vice versa), has absolutely nothing whatsoever to do with dark matter, nor is dark matter needed to explain it.

What the author should have said is: since the 1960s we have known that gravitational forces on large astronomical scales seem to be stronger than we can account for, and so either our equations for gravity are wrong or there is matter out there, pulling on things gravitationally, that we cannot see with any type of telescope.  The reason the latter possibility is taken more seriously than the former by most experts is that attempts to modify gravity have not led to a convincing case, while the evidence for additional “dark” matter has grown very strong over recent decades.

Here’s one of the several arguments that suggest the possibility of dark matter… the simplest to explain. Experts study the motions of the stars in our own galaxy — the star city known as the Milky Way — and also study the motions of stars in other galaxies. [The overall motions of galaxies themselves, inside giant clusters of galaxies which can be found in deep space, are also studied.] Now what we ask is this; see Figure 1. Supposing all of the matter that is out there in the universe is of a type that we can see in one way or another: stars, gas, dust of various types. Then we can figure out, just by looking with a telescope and doing simple calculations, roughly how much measurable matter is in each galaxy, how much mass that matter has, and where it is distributed inside the galaxy.  We can next use that information to figure out how hard that matter pulls on other matter, via the force of gravity. And finally — crucially! — we can calculate how fast that pull will make the matter move, on average.  And what do we find when we measure how fast the stars are moving? Our calculations based on the matter that we can see are wrong. We find that the stars in the outer edges of a galaxy, and the galaxies inside clusters, are moving much, much faster than our calculation predicts. (This was discovered in the 1960s by Vera Rubin and Kent Ford.)  It’s as though they’re being pulled on by something unseen — as though the gravity on the stars due to the rest of the galaxy is stronger than we’ve guessed. Why is this happening? 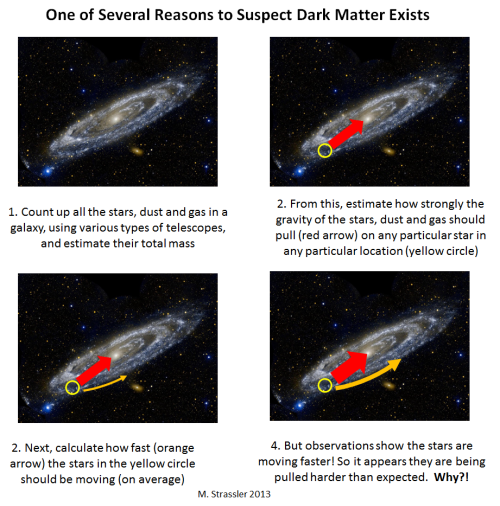 Fig. 1: One of several lines of evidence in favor of the hypothesis of dark matter is that stars in the outer regions of galaxies move much faster than would be the case if the galaxy was made only from what we can see.

One possibility is that there is matter out there that we can’t see, a lot of it, and that matter is inside galaxies and inside clusters of galaxies, exerting a pull that we haven’t accounted for properly. A huge “halo” of dark matter, in this view, surrounds every galaxy (Figure 2).

Clearly, this isn’t the only logical possibility. Another option is that there could be something wrong with our understanding of gravity. Or there could be some other new force that we don’t know about yet that has nothing to do with gravity. Or maybe there’s something wrong with the very laws of motion that we use. But all attempts to make sensible suggestions along these lines have gradually run into conflicts with astronomical observations over the recent decades. 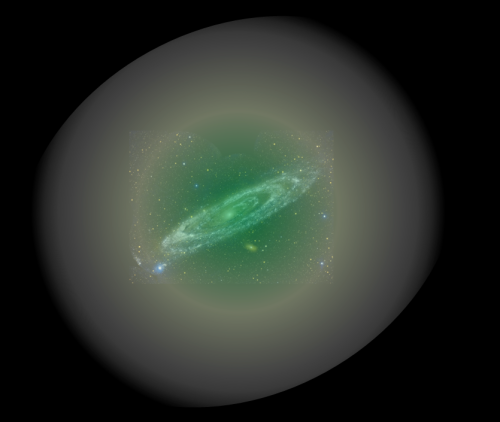 Fig. 2: The visible part of every galaxy is believed to lie roughly at the center of a much larger halo of dark matter.

Meanwhile, during those last few decades, a simple version of the “dark matter” hypothesis has passed test after test, some of these tests being very complex and subtle. For example, in Einstein’s theory of gravity, gravity pulls on light, and can bend it much the same way that the lenses in eyeglasses bend light. A galaxy or galaxy cluster can serve to magnify objects behind it, and by studying these lensing effects, we again conclude there’s far more matter in galaxies and in clusters than we can see.  And there are other arguments too, which I won’t cover now.

So while an explanation for the fast motion of stars inside galaxies, and galaxies inside clusters, isn’t 100% sure to be dark matter, it’s now, after many years of study, in the high 90%s. Don’t let anyone tell you that scientists rushed to judgment about this; it has been studied for decades, and I can tell you from experience that there’s a lot more consensus now than there was when I was an beginning undergraduate 30 years ago.

“Those traces, when they are finally found, will be exotic particles left over from the Big Bang.” Will they? Will the dark matter turn out to be particles from the Big Bang? Not necessarily. We know that’s one possibility, but it’s not the only one. Since I explained this point last week, I’ll just refer you to that post.

Now here come the big meta-questions: should the New York Times be more careful about what it puts on its editorial page? Should its editors, who are not scientists, talk broadly about a subtle scientific topic without fact-checking with an expert? What are the costs and benefits when they put out oversimplified, and in some ways actually false, information about science on their editorial page?