[This is part 5 of a series, which begins here.]

In a previous post, I told you about how physicists use computers to study how the strong nuclear force combines certain elementary particles — specifically quarks and anti-quarks and gluons — into hadrons, such as protons and neutrons and pions.  Computers can also be used to study certain other phenomena that, because they involve the strong nuclear force where it is truly “strong” [in the technical sense described here], can’t be studied using simpler methods of successive approximation. While computers aren’t a panacea, they do allow some important and difficult questions about the strong nuclear force to be answered with precision.

To do these calculations, physicists study an imaginary world, as I described;

There’s one more interesting method for understanding the strong nuclear force that I haven’t mentioned yet, and it too involves changing the quark masses — making them smaller, rather than larger! And weirdly, this doesn’t involve the equations of the quantum field theory for the quarks, antiquarks and gluons at all. It involves a different quantum field theory altogether — one which says nothing about the quarks and gluons, but instead describes the physics of the hadrons themselves. More precisely, its equations are useful for making predictions about the hadrons of lowest mass — called pions, kaons and etas — and it works for processes

This includes some of the phenomena involved in the physics of atomic nuclei, the next level up in the structure of matter (quarks/gluons → protons/neutrons → nuclei → atoms → molecules).

Notice this is the opposite regime of where the quantum field theory of quarks and gluons works well!  Successive approximation works well at short distance and high energy, for any quark masses, and computer simulations are easiest for larger quark masses.  But long distances and low energies are very important, because processes important in our lives obviously involve longer distances than protons, and also (less obviously) involve energies much lower than those involved in holding the proton together.

This kind of theory is often called an “effective quantum field theory”; it is useful for making predictions about low-energy and long-distance phenomena, but it’s not a complete theory, because it can’t predict what happens to pions and kaons and etas at higher energy and shorter distance.  [What actually does happen is that their inner structure becomes really important in their behavior.]  This is in contrast to the quantum field theory of the quarks and anti-quarks and gluons, which is supposed to apply at all energies and distances that we’ve measured so far, and perhaps even much higher energies and shorter distances. The only reason we don’t use the latter theory at long distance and low energy is that we don’t know how; it’s too difficult in practice. The effective quantum field theory of the pions etc. simplifies the problem for us, and gives us a tool that we can use in understanding how nuclei form, etc.   We don’t need to follow all the details of quarks and gluons to understand how nuclei form, just as we don’t need to follow all the details of atomic nuclei to understand how atoms form. 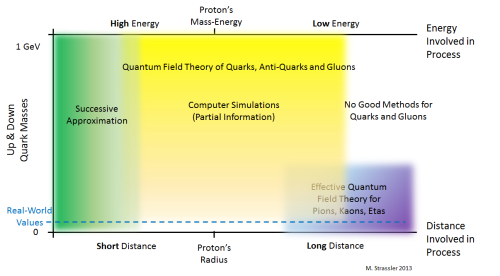 Fig. 1: The equations for the quantum field theory of quarks. anti-quarks and gluons can be studied using successive approximation at short distance and high energy, and using computer simulations in intermediate distances and energies. The latter is not useful for very low quark masses. The effective theory of lightweight hadrons is useful for low quark masses, long distances and low energies. The real world’s quark masses (blue dashed line) are low enough for the effective theory of hadrons and just barely high enough for modern computer simulations.

The complementary nature of the various approaches to the strong nuclear forces is illustrated in Figure 1.  Successive approximation [or  “perturbation theory” in jargonese] works (no matter what the quark masses are) at short distances, where the strong nuclear force isn’t strong, in the technical sense.  Computers are needed, and useful, at intermediate distances, but are easiest when the quark masses are much larger than in the real world.  And finally, the method of an effective theory for the low-energy behavior of the lowest-mass hadrons is especially powerful when the quark masses, and therefore the masses of the pions, kaons and etas, are very small.  Notice that in the real world (indicated by the blue dashes) the quarks masses are simultaneously small enough and large enough to allow some overlap between the various methods. In short, we are lucky: we can check our understanding of the strong nuclear force in multiple ways.  If the quark masses had been much smaller or somewhat larger, this would have been more difficult.  [Had they been much larger, things would have simplified again; but that’s another story for another day.]

This effective theory explains that if the up, down and strange quarks’ masses were reduced to zero, then pions, and their cousins called kaons and etas, would become massless. [Technically: they would be Nambu-Goldstone particles, bosons in particular, whose presence is a consequence of the “spontaneous breaking”, or hiding, of a subtle symmetry.] Meanwhile, protons and neutrons would change rather little from what we find in nature — their masses would be almost the same as before. [This is one of the reasons why the naive statement that the Higgs field is responsible for all mass in the universe is dreadfully wrong; even if the Higgs field were zero and the quarks were massless, the protons and neutrons that provide you with most of your mass would still have masses.]

This theory also explains why many processes involving hadrons are related to one another, and occur with the same (or similar) probabilities or rates.  Moreover, even figuring out just how changing the quark masses affects our computer simulations requires this effective theory.

So when we consider imaginary worlds for which we have no experiments to guide us, and for which no one has done extensive computer studies (if they are even possible), we often find ourselves in some difficulty figuring out what would happen in such a world…