A Quantum Gravity and Cosmology Conference

I attended a conference this past week celebrating two great physicists (Steve Shenker and Renata Kallosh) whom I got to know pretty well during the early part of my career. Unlike most of the conferences I’ve attended in recent years, there were no talks at all about the Large Hadron Collider; the community of speakers was largely drawn from experts on quantum field theory, quantum gravity, string theory and cosmology. 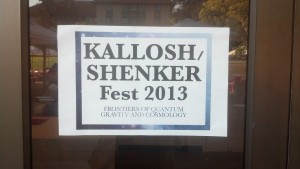 Any one of the talks would require an extensive article, especially since the required background material isn’t currently explained on this website. So rather than get bogged down in details, I thought I’d try to give you more of the general flavor — reflective, perhaps, of the tenor of the field at the moment. I’ll cover a couple of the talks later, if time permits (though I’m a bit under the gun at the moment…)

So what were the talks about?  What are these people actually doing?

A substantial number — everyone from the Nobel Prize winner Gerard ‘t Hooft to string theory expert Joe Polchinski to the calculator-par-excellence Zvi Bern — are trying to understand aspects of quantum gravity, in one way or another. This entails finding some way of reconciling the quantum world (central in the physics of particles and atoms and molecules and materials, and in quantum computers) with gravity (for which our best [but incomplete] description is Einstein’s theory of general relativity.)

Many of the speakers (as well as Kallosh and Shenker themselves) have been drawn to the problem of black holes, because these objects, and the information stored within and around them, are a place where quantum and gravity meet head on. Since the 1970s, when Hawking and Bekenstein showed that quantum phenomena were important in understanding black holes properly, confusions and controversies have raged over how to think about these mysterious objects. Many great theorists have banged their heads on this problem, and arguably none have escaped unscathed.

Why has the controversy gone on so long? It is because the mathematics required to study these problems is simply too hard — no one has figured out how to simplify it enough to understand precisely what happens when black holes form, radiate particles, and evaporate.

You may wonder why so many experts spent some time working on string theory in the 1990s. The reason is that a sequence of conceptual and mathematical breakthroughs between 1995 and 1997 made a number of very difficult problems dramatically simpler. (You might enjoy my 3 short videos explaining the history.) It was learned how to use string theory to study the quantum properties of black holes, which had never been done before. (Note that these results do not depend on whether string theory is “right” — i.e., whether it is the correct theory of how quantum gravity works in nature. String theory in this context is a tool: it allows you to calculate things that couldn’t be calculated before.)

Unfortunately, despite Herculean efforts over 15 years to put them to use, it appears that the technical advances of the 1990s were insufficient.  The mathematics of black hole evaporation is still too complicated, and we still don’t have the methods necessary to answer the deepest puzzles of quantum gravity.  This, in part, is why the specifics of string theory are no longer at the forefront of current attempts, within the community at the conference, to answer these questions.

In fact, we heard this from none other than Lenny Susskind (famous for his efforts, along with those of ‘t Hooft and many others, to oppose Hawking’s view that black holes require no revision of quantum mechanics, but now himself deeply puzzled by the firewall problem — the failure of what Susskind called `complementarity’). Susskind stated clearly his view that string theory, as currently understood, does not appear to provide a complete picture of how quantum gravity works.  Well, various people have been saying this about string theory for a long time (including ‘t Hooft, and including string theory/gravity experts like Steve Giddings, not to mention various experts on quantum gravity who viscerally hate string theory).  I’m not enough of an expert on quantum gravity that you should weight my opinion highly, but progress has been so slow that I’ve been worried about this since around 2003 or so.  It’s remarkable to hear Susskind, who helped invent string theory over 40 years ago, say this so forcefully.  What it tells you is that the firewall puzzle was the loose end that, when you pulled on it, took down an entire intellectual program, a hope that the puzzles of black holes would soon be resolved.  We need new insights — perhaps into quantum gravity in general, or perhaps into string theory in particular — without which these hard problems won’t get solved.

Another area of interest at the conference concerns supersymmetric versions of gravity (“supergravity”). Now, why bother with supersymmetry? One reason people often work on supersymmetry is that the presence of superpartner particles with masses near 1 TeV/c² could perhaps resolve the naturalness problem of the Standard Model. (This possibility is looking increasingly doubtful, but is not yet excluded by the data from the Large Hadron Collider.) But there are several other reasons.

So there are at least two types of reasons to study supersymmetric versions of gravity.

Some speakers were therefore just interested in how supersymmetric gravity actually works, on its own merits.  There’s plenty of interesting mathematics, some of which might have implications for physics too.  Other speakers wanted to understand black holes, for reasons I’ve already described.

Another area of great interest is the era of cosmic inflation — the period, still conjectural but increasingly plausible, during which the universe is believed to have expanded, in a tiny tiny fraction of a second, by at least a factor of 1,000,000,000,000,000,000,000,000,000. [Yes. That’s right. Sounds insane, doesn’t it? Blame Einstein’s equations… they say it’s possible, and since they make many correct predictions, we’ve no choice but to take them seriously on this one too…] Experts on quantum gravity in general, and string theory in particular, often hope that somehow measurements of the properties of the early universe, specifically of inflation, will provide them a context in which to test their theoretical ideas… a long shot, but not impossible.

There were several talks on this subject, ranging from the implications of the most recent data on the cosmos to theoretical studies of the various possible causes of this extraordinary inflation, including a couple of new approaches with novel predictions that can be checked against future data. Advances in our observations of the universe are now so good that a number of possible forms of inflation are now ruled out; meanwhile, others are still in very good agreement with data.  This is definitely an exciting area to watch over the coming years.

There were also a few very important discussions of the physics of materials, and of other quantum systems. I found these so interesting that I think I’ll describe them in a post of their own… they had to do with the “phases” of quantum systems.  What’s a `phase’? In this context, it’s best described as a general state of being: the phases of water that we are all familiar with are ice, liquid water and steam.  More generally, the familiar phases of materials are solids, liquids and gases.  But materials can do many other things too.  They can be electrical conductors or insulators or superconductors; they can be magnets, of several different kinds; and there are many examples that won’t be familiar in ordinary life but play a big role in technology, or at least in forefront research.  Anyway — more on this soon.

129 responses to “A Quantum Gravity and Cosmology Conference”