Reviewing the Search for the Higgs

Since we’re now approaching the time when the preliminary results from December on the search for the Higgs particle at the Large Hadron Collider (LHC) will be presented in final form, possibly with small but important adjustments, and since there will be additional results based on the fall’s data in the next few weeks, it would be good to do a little review of where things stand and where they’re going.  I won’t do this all in one post but let’s get started.

Of course there is a lot of material on this website already and I’ll point you to it.  Perhaps my most concise and least technical discussion of the search for the Higgs appeared as a guest post on Cosmic Variance (thank you to Sean Carroll for the invitation.)  In that post I emphasized that the LHC’s Higgs program has two phases (broadly speaking.)  The first phase is to search for and either find or exclude the simplest possible form of Higgs particle, known as the Standard Model Higgs particle (or SM Higgs for short).  This is a finite task, so at a certain point (presumably this year) this phase comes to an end.  The second phase, which will take a better part of a decade, and (as I’ll describe over time) begins this year, depends on whether a particle that resembles an SM Higgs is discovered or not.  To explain the basic logic, I presented a figure in the Cosmic Variance post, which I am reproducing here: 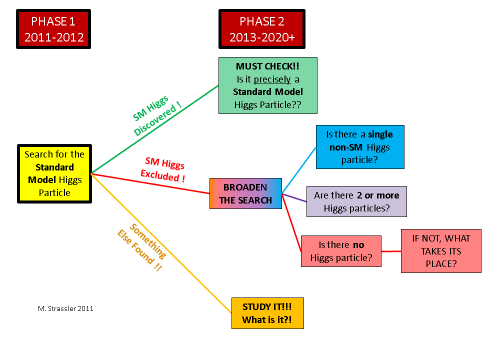 Fig. 1: From my guest post in Cosmic Variance: The basic logic of the Higgs search, showing Phase 1 in which the simplest form of Higgs particle (the Standard Model Higgs) is found or excluded, and the logical questions that will follow in Phase 2. See Figure 3 for a more complete version.

If you’ve been noticing how slowly the discovery of the Higgs takes place — first there are hints, and only months later can one know whether those hints are real or not — then it will not surprise you to learn that the line between Phase 1 and Phase 2 isn’t sharp. The scientists at the LHC experiments ATLAS and CMS will be doing both of them this year, because they can, and because they should. 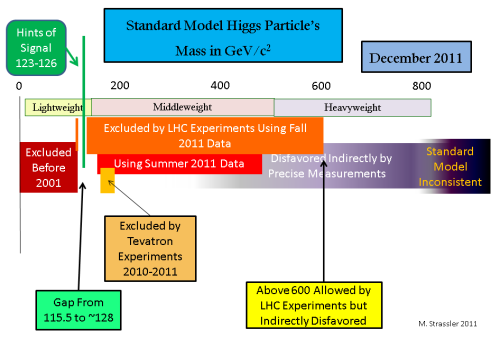 Fig. 2: Phase 1 of the Higgs search now leaves only a tiny window at small masses and a window at large masses that is disfavored by two decades of precision measurements. Notice how much progress was made in 2011 alone!

So we can start looking ahead to Phase 2 — indeed we must.    In particular, if there is indeed a new particle with a mass of 125 GeV/c2 that resembles an SM Higgs, then (from Figure 1) we now have to verify whether it is or isn’t exactly what the Standard Model predicts.  Any deviation whatsoever from the precise predictions of the Standard Model would be a historic, game-changing, and Nobel Prize-deserving discovery!  So the stakes are very high.

Now, Figure 1 was actually a simplified version of the game plan for the Higgs search.  A more complete version, which was too elaborate for the short and sweet Cosmic Variance article, is shown in Figure 3.  I’ll go through this figure carefully (which itself isn’t entirely complete) over the coming days and weeks.  But suffice it to say that 2012 will involve a lot of work on the three research programs located at the far right of the figure: 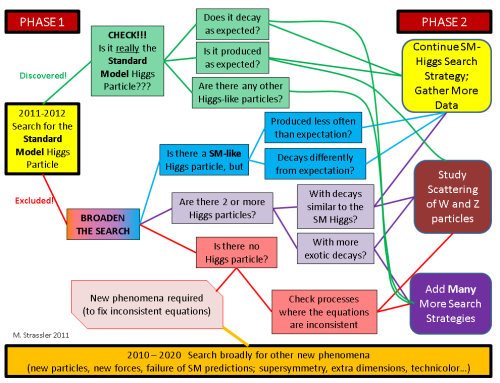 Fig. 3: As Phase 1 of the Higgs search comes to a close, Phase 2 begins, with a series of logical questions and corresponding measurements. Even while the hints of a Higgs particle at 125 GeV are being checked with more data, studies of whether this might or might not be a Standard Model Higgs particle will be underway.

As you can see from the figure, these very large research programs needs to be carried out whether or not the current hints of a Higgs turn out to be ephemeral.  In other words, the experimenters can be working already on Phase 2 no matter what the outcome of Phase 1 turns out to be!  Very convenient, of course…  but it means we need to do some planning for Phase 2 now!  [And not of all of the most urgent issues have been addressed yet, which is why I’ve been very busy… more on that later…]

17 responses to “Reviewing the Search for the Higgs”