The Large Hadron Collider is mainly a machine for smashing protons into each other.  But what’s a proton?

First and foremost, it’s a mess.  A total mess.   As ugly and chaotic as a hydrogen atom is elegant and simple.

Ok, then, what’s a hydrogen atom? 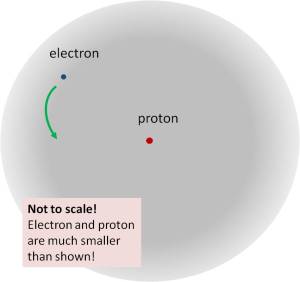 The elegant simplicity of Hydrogen: the heavy proton almost stationary at the center, and the lightweight electron moving at ~1% the speed of light within the grey-shaded region. (M. Strassler 2011)

It is the simplest example of what physicists call a “bound state” — the word “state” basically just meaning a thing that hangs around for a while, and the word “bound” meaning that it has components that are bound to each other, as spouses are bound in marriage.  In fact, the image of a married couple, especially one with one spouse weighing a lot more than the other, is probably the one you want.  A proton sits in the center, barely moving, while floating around on the edges, moving a lot faster than you and me but much slower than the speed of light, the ultimate speed limit, is a lightweight electron.   It’s a peaceful vision of marital bliss.

Or so it appears, until we look into the proton itself.  The inside of the proton itself is more like a commune packed full of single adults and children: pure chaos.  It too is a bound state, but what it binds is not something as simple as a proton and an electron, as in hydrogen, or even a few dozen electrons to an atomic nucleus, as in more complicated atoms such as gold, but zillions (meaning “too many and too changeable to count usefully”) of lightweight particles called quarks, antiquarks and gluons.  (More on them elsewhere.)  It is impossible to describe the proton’s structure simply, or draw simple pictures, because it’s highly disorganized.  All the quarks and antiquarks and gluons inside are rushing around as fast as possible, at nearly the speed of light.

Snapshot of a proton -- and imagine all of the quarks (up,down,and strange -- u,d,s), antiquarks (u,d,s with a bar on top), and gluons (g) zipping around near the speed of light, banging into each other, and appearing and disappearing. (M.Strassler 2010)

You may have heard that a proton is made from three quarks.  Indeed here are several pages that say so.  This is a lie — a white lie, but a big one.  In fact there are zillions of gluons, antiquarks, and quarks in a proton.   The standard shorthand, “the proton is made from two up quarks and one down quark”, is really a statement that the proton has two more up quarks than up antiquarks, and one more down quark than down antiquarks.   To make the glib shorthand correct you need to add the phrase “plus zillions of gluons and zillions of quark-antiquark pairs.”  Without this phrase, one’s view of the proton is so simplistic that it is not possible to understand the LHC at all.

The Tiny White Lie: Wikipedia's sterotypical image of a proton as two up quarks and a down quark bound together.

In short, atoms are to protons as a pas de deux in a delicate ballet is to a dance floor crowded with drunk twenty-somethings bouncing and flailing to a DJ.

This is why, if you are a theorist trying to understand what the Large Hadron Collider will observe in its collisions of protons, you’ve got a challenge.  It isn’t so easy to make predictions for collisions of objects that you can’t characterize in a simple way.  But fortunately, starting back in the 1970s, following ideas of Bjorken from the late 1960s, theoretical physicists found a relatively simple and workable technique. Still, the technique only works to a certain extent, typically only accurate to ten percent or so (though occasionally better.)  For this and several other reasons, the reliability of our calculations at the LHC is always somewhat limited.

Now, what about all those quarks, antiquarks and gluons — what are these particles?  that’s another article…

But you then might well ask, “Wait a second! You’re telling me that the Large Hadron Collider somehow smashes protons together that are 100,000 times smaller than atoms?  How can anyone possibly do that?!”