If molecules — the main structures that are involved in chemistry — are the words from which all of the materials around us are built, then atoms are the letters, the building blocks for molecules.  Just as there are words of all lengths, a typical molecule may contain a few or a hundred or even a hundred thousand atoms.  A molecule of table salt (NaCl) contains two atoms, one of sodium (Na) and one of chlorine (Cl); a molecule of water (H2O) has two of hydrogen and one of oxygen; a molecule of table sugar (C12H22O11) is made from twelve atoms of carbon, eleven of oxygen and twenty-two of hydrogen in a very particular arrangement.

How do we know atoms exist?  In some cases, we can “see” them, much as we can see the molecules that they can form… not with our eyes, but with more advanced “seeing” devices.  One method involves a “scanning tunneling microscope”, which can show the atoms inside a crystal, or even move them around one at a time. Another method uses our ability to trap ions (atoms which are slightly altered, as explained below). Here is a photo showing evidence of three ions being trapped simultaneously. [Light is shined onto the ions, which is then absorbed by the ions and re-emitted. The re-emitted light can be detected, allowing us to “see” where the ions are, in a way somewhat analogous to how a reflection of light off a tiny but shiny diamond allows us to find it.]

How many types of atoms are there?  The types are called “chemical elements”, and the precise number depends on how you count, but let us say for the moment that the atomic alphabet consists of about a hundred chemical elements; we’ll return to the counting subtleties later.  Just as we could associate the letters in the alphabet, A to Z, with the numbers 1 to 26, every element is given not only a name but also a number, called the atomic number, and often written “Z”.  The simplest atoms are those of the element hydrogen; it has atomic number 1. The most complex atoms found in abundance in nature are those of the element uranium, which has atomic number 92.  Others include oxygen (8), nitrogen (7), calcium (20), krypton (36), lanthanum (57), platinum (78).  You can find the full list here, in the “periodic table of the chemical elements.”  Which element an atom represents determines its chemistry — how it behaves inside molecules — just as the member of the alphabet that a letter represents determines how that letter can function inside various words.

It turns out that all of these questions are best answered by starting with question number 1: what are atoms made of? Atoms are made of objects usually called “subatomic particles”.  [Unfortunately the term is somewhat misleading, as we’ll see, for these “particles” have some properties that aren’t very particle-like at all.]  Specifically, atoms consist of a set of tiny featherweight electrons surrounding a very small but heavy atomic nucleus that contains most of an atom’s mass. The nucleus is made of other “particles”, which are made of yet other “particles”; we’ll get to them in future articles.

We often see cartoon pictures of atoms drawn on chemistry books, advertisements, and warning signs. An example is given in Figure 1. It conveys the very rough idea of what an atom is like: it has a certain number of electrons (drawn here in blue) on the outside, in orbit around a central atomic nucleus. The nucleus is a cluster of protons (drawn red) and neutrons (drawn white). 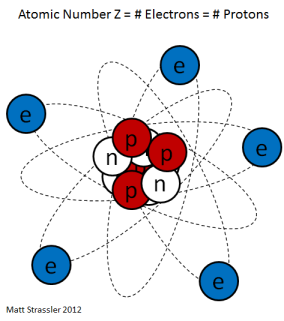 Fig. 1: A cartoon of an atom, showing electrons (e) on the outside orbiting a nucleus, made from protons (p) and neutrons (n), at center.  The numbers of protons equals the “atomic number”, often denoted “Z”; in its simplest, electrically neutral state, the atom has the same number of electrons as protons.

Now we can answer question 2: what does the atomic number Z mean? It is simply how many protons an atom has.  Oxygen has atomic number 8, so its nucleus has 8 protons.

However, it is not unusual — in the process of forming molecules, for instance — for an atom to gain or lose one or more of its outermost (or “valence”) electrons.  In this case the electric charges of the electrons and protons don’t cancel, and the resulting electrically-charged atom is called an ion.

Although the cartoon in Figure 1 vaguely captures the overall architecture of an atom — it is true that there are electrons on the outside and a nucleus made of protons and neutrons in the middle — it profoundly fails to convey the real shape and character of an atom, because (1) it’s not at all to scale, and (2) we live in a quantum world, in which objects often behave in ways that are hard to draw or visualize.

Problem (1) can be partly dealt with through the somewhat more accurate (though still highly imperfect) image shown in  Figure 2.

Fig. 2: A more accurate depiction of an atom, showing it is mostly empty space (grey area) traversed by rapidly moving electrons (blue dots, drawn much larger than to scale) with the heavy nucleus (red and white dot at center, drawn larger than to scale) at center. Its shape is like that of a rural community, with expanses of uninhabited land, a few scattered farm houses, and a small village with closely packed houses at its center.

Let me explain what I’ve tried to convey through this image. First, electrons are very, very tiny, so small that we have never been able to measure their size — for all we know they are point-like, with zero size, but certainly they’re at least 100,000,000 times smaller in diameter than atoms. Second, the nucleus (and the protons and neutrons that make it up) is also very tiny, though larger than the electrons; its size has been measured, and is about 10,000 to 100,000 times smaller in diameter than its atom. An atom is in some ways like a small rural community. You might think of the protons and neutrons that make up the atomic nucleus as somewhat larger houses that make up the village in the center of the community, and the electrons as the far-flung farmhouses scattered around the village. Most of the land of the community — analogous to the realm of the electrons — contains crops but no houses. Although the territory that is considered part of the town may be quite large, the actual amount of area occupied by houses is very small, as is the area occupied by the village at the center of the town.

The analogy only goes so far, since the electrons, unlike the farmhouses, are in rapid motion, moving through the greyish region in the figure and around the nucleus at speeds that are typically about one percent of the speed of light. Note also that the territory they tend to cover, the grey spherical cloud, is not accurately drawn; it often has a more complicated shape, and not all of the electrons travel in the same region.

But as I warned you, Figure 2 still isn’t really accurate.  First, I’d have to draw the nucleus thousands of times smaller, and electrons millions of times smaller, than I have, in which case you wouldn’t see them on the picture at all. For scale, if an atom were the size of your bedroom, its nucleus would be the size of a speck of dust (unless you’ve got a really big bedroom.)  Compared to the size of the objects out of which they are made, atoms are huge!  In a sense (but see below) atoms are mostly empty space!

And second, much more profound and subtle, the figure does not convey the murky nature of quantum mechanics.  We use the equations of quantum mechanics to describe and predict the behavior of molecules, atoms, and subatomic particles, and those equations tell us that “particles” can have very strange and counter-intuitive properties.  Even though electrons are point-like in one sense (for instance, if you try to bounce two electrons off each other, you will find you can get them arbitrarily close together without them revealing that they have any structure), there is a way in which, when left alone, they can spread out like a wave, and fill out the entire grey area in Figure 2.  If that sounds strange, it’s not because you’ve misunderstood; it is strange, and hard to think about.    I certainly don’t have an ideal way to draw it that wouldn’t be misleading, and experts still argue about what is the best way to think about it.  So please just accept this as a strange fact, for now.

Whereas the electron’s size (if it has one) is too small to measure, and its mass is so small that the electron can spread out over a whole atom, the nucleus, on the contrary, has a measured and well-known size, and its mass is so large — more than 99.9% of the whole atom’s mass — that it barely spreads out at all.   The nucleus mostly just sits at the center of the grey area as the atom moves about.

The Atom and Its Chemistry

So the best way to describe an atom that I can come up with is this: most of an atom’s mass is carried by the small nucleus that sits at its center, around which extremely tiny electrons, with much smaller mass, are spread out (through the weirdness of quantum mechanics) in a most un-particle-like way, filling the grey area in Figure 2.

The tiny size of the nucleus relative to the whole atom, and its tendency to sit at the center of the atom, explains why it plays a relatively minor role in chemistry. Chemistry occurs — molecules form and change — when atoms come close together, and that happens when the outermost (“valence”) electrons from one atom come close to those of another atom — when the edge of the grey region of one atom comes into the general vicinity of the grey region of another atom. In chemical processes, the atomic nuclei remain at the centers of their atoms, and never come anywhere near each other, relatively speaking.  The main roles of the nucleus are providing the positive charge that holds the electrons in the atom, and providing most of the atom’s mass (which determines how easy it is for other objects to push the atom around.)

And so this gives us the answer to question 3: what determines an atom’s chemistry is (mostly) the details of its outermost (“valence”) electrons.  These details can be determined (in a somewhat elaborate way, using quantum mechanics equations) from its atomic number Z.

Instead of pursuing chemistry itself, a subject for a whole college course, we’ll continue on down to the subatomic particles, addressing along the way the other questions that are still unanswered. Here are the ones we dealt with and the ones that we still have to get to:

And here is another that may have occurred to you, based on Figure 2: