At the SEARCH Workshop on the LHC

This weekend I am fortunate to be participating in a very interesting workshop on Large Hadron Collider [LHC] physics, held at the University of Maryland. Called the “SEARCH Workshop“, it was organized by three theoretical particle physicists, Raman Sundrum (University of Maryland), Patrick Meade (SUNY Stony Brook) and Michele Papucci (Lawrence Berekely Laboratory), and they’ve brought together many theoreticians and experimentalists of all stripes from within the Big Tent of LHC physics. With the exception of a panel discussion at the very end, all of the talks are experimental, from ATLAS and CMS. We’re hearing about all of the major searches that ATLAS and CMS have done at the LHC —- starting yesterday with searches for Higgs particles, heavier partners of the top quark and bottom quark, and several variants of supersymmetry — and there’s lots of time for detailed discussion.

I can’t possibly review everything being shown in the talks — ATLAS and CMS have done a huge number of analyses. But I’ll point out a couple that caught my eye that I haven’t specifically talked about in past posts (which include ones here, here, here, here, and here.)

The first part of the workshop involved the search for a lightweight Standard Model Higgs (the simplest possible form of the Higgs particle.) In particular, we heard the latest on the hints of a signal of a Standard-Model-like Higgs particle with a mass of 125 GeV/c2.

A very interesting result from ATLAS was an application of their two-photon Higgs studies to what is called a “fermiphobic Higgs”, [I am reminded to point out that CMS also has analyzed their data this way; but my point is not directly about the search anyway.]  A “fermiphobic Higgs” is a (non-Standard-Model) Higgs particle that does not couple to matter particles as expected (in which case the masses of the matter particles would come from a separate source… a second Higgs field.) More generally this is just a Higgs for which the most common of the ways to produce Standard Model Higgs particles — p p –> H via a collision of two gluons — is suppressed, and the process p p –> q q H (“vector boson fusion”) is the main way to make Higgs particles. [Here “p” stands for proton and “q” for quark; see this article for more details on what these notations mean.] While the rate of p p –> q q H is smaller than the rate for p p –> H, the rate for the Higgs to decay to two photons is increased, with the effect that the signal of a Higgs at the LHC is not at first glance very different from a Standard Model Higgs. One main difference is that most Higgs particles come with two jets from the two quarks (the q’s in  pp –> qqH), which is not true for the Standard Model Higgs. There weren’t enough details given in the talk, so I have to read the paper, but basically what ATLAS showed indirectly gives us some indirect insight into what ATLAS has to say about what fraction of their Higgs signal is coming from the p p –> q q H process — the same thing that CMS told us back in January and recently updated. I still have to think this through to understand the implications fully, and will let you know when I do.

In theories that are more complicated than the Standard Model (which has the simplest form of the Higgs particle) there may be several Higgs particles, rather than just one. One or more of them may be electrically charged. And if a charged Higgs particle is sufficiently light (lighter, say, than 150 GeV) then the top quark may sometimes decay to a charged Higgs plus a bottom quark. The Tevatron experiments CDF and DZero looked for signs of this process, in the case that the charged Higgs decays to a tau lepton and an anti-neutrino, and they were able to show that at most 10-15% or so of top quarks decay to a charged Higgs of this type. CMS and ATLAS have now managed to reduce this possibility to 1-2%.

What is especially interesting, for experts, is that CMS and ATLAS are so good at studying hadronically-decaying tau leptons that their best results come from the case when

which is a case which has only jets and hadronically-decaying taus — not at all the case that I, or almost anyone else in the community, I suspect, would have guessed would be the most powerful. Traditionally taus that decay to hadrons are considered to be somewhat hard to work with, and collisions that produce no leptons or photons or large amounts of “missing energy” (really, missing momentum perpendicular to the proton beams) have been considered the most challenging. That events of this type give the best results is a testament to how wonderfully the detectors ATLAS and CMS are working, and how capable are the experimentalists who built them and operate them. Also one should mention the theorists who developed new techniques for defining jets a few years back, which have helped make such measurements easier to carry out. 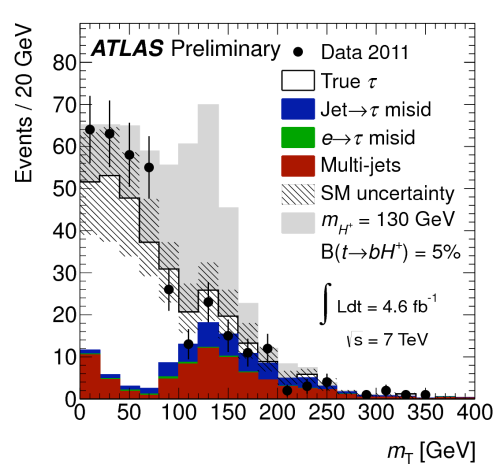 Extraordinary ATLAS data showing how easily a signal (grey) of top quarks decaying 5% of the time to charged Higgs particles would show up in their analysis using hadronically-decaying taus and W particles decaying to jets. Prediction in the absence of any charged Higgs is the black solid histogram; data is the black dots. CMS has a similar result (but not as cool a plot.)

At the end of the day there was a very interesting and wide-ranging discussion session, part of which I have to relate because it is relevant to what I was writing about in January on this website. Michelangelo Mangano, one of the leading theorists at the LHC, opened the discussion by arguing that we really needed to think through the Higgs program for the coming years. He suggested three main directions:

We didn’t discuss his first point (which I think most of us have not thought about yet.)  His second point was discussed quite widely, as it needs to be; I think it is uncontroversial, but we have to talk more about the backgrounds to the various measurements.   And on his third point…

Now I’ve written here about the possibility of exotic decays of the Higgs, because I personally think this is a very high priority for 2012 — or more precisely, that it is a really important priority for the data that we collect in 2012 (the data analysis could be done later). And I’ve worried a lot over the past three months about the triggering strategies [i.e. how exactly to select the tiny fraction of the LHC’s collisions that can be permanent stored, one of the great challenges at a machine like the LHC] for such decays. So I  mentioned my concerns and my recent studies about triggering, and suggested that in order to help ATLAS and CMS make decisions about how to run their triggers in 2012, some of the theorists in the room ought to do some quick studies that would clarify how one would actually make the measurements of various exotic decays.

This sparked a very lively discussion, in which my point of view was questioned and criticized by a few of the experimentalists in the room, with a couple expressing support and others general doubt. The contrary point of view is that

Currently the cases for and against this point of view are badly incomplete — there are many required theoretical studies that have not been done. What all agreed was that the theorists in the room who think exotic decays are important need to make a clear case that a change in trigger strategy is actually needed.

Fortunately, the theorists in the room include about twenty who have thought about exotic Higgs decays over the last five years or so… most from the generation younger than I am, many of them professors already and very well-known in the field. And I think seeing the questions that the senior experimentalists were raising got their attention. So… on the initiative of a few of them, we’re all meeting today to discuss how to proceed.

This is what happens at good workshops — they serve as an opportunity for an exchange of ideas and a catalyst for important problems to be addressed.

32 responses to “At the SEARCH Workshop on the LHC”