There are five major processes by which the Standard Model Higgs particle (the simplest possible type of Higgs particle that might be present in nature) may be produced.  In this article I’ll tell you what they are, and what you’d learn if you measured each of them precisely.

Unfortunately life is not so simple, because the Higgs falls apart (decays) on a microscopic time-scale, so the only thing we measure is what it decays to. And so when we study the Higgs particle in an experiment we always have to think about both how it is produced and how it is decaying. So after reading this article you should also read the article on how the Standard Model Higgs decays, and then the article on how one puts the production and decay together to figure out how to discover and study the Standard Model Higgs particle.

The five processes, and the production rates for them at the Large Hadron Collider with 7 TeV of energy per collision, are shown in Figure 1, which is taken from the latest greatest calculations, organized by the LHC Higgs Physics Working Group, a collection of a couple of dozen theorists and experimentalists who are experts on the subject. 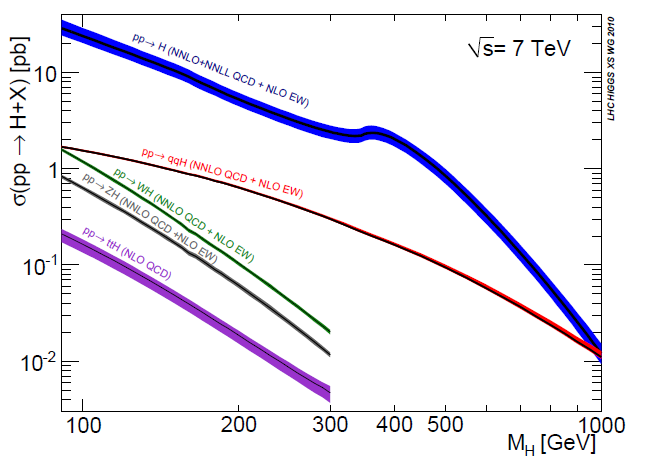 Fig. 1: The rates (see text for interpretation) for the five largest Higgs-production processes, versus the mass-energy (in GeV) of the Standard Model Higgs particle, as calculated using the equations of the Standard Model. Notice both axes use a logarithmic scale. Thickness of the curves indicates the level of uncertainty in the calculation. The three lower curves stop at 300 GeV only because the processes they refer to become unmeasurably small. In the labels, "p" "q" and "H" stand for "proton", "quark" (up or down quark mostly) and "Higgs"; "t" stands for top quark. (The acronyms in parentheses refer to technicalities of the calculation.)

Let me explain briefly how to read this graph. On the horizontal axis is the Higgs particle’s mass, expressed through its mass-energy [E=mc2] in GeV. (For scale, the proton has a mass-energy of about 1 GeV, the W particle a mass-energy of 80 GeV, and the top quark a mass-energy of about 173 GeV.) On the vertical axis is a production rate expressed in a funny unit. The best way to understand it is that whatever number appears there, you should multiply by about 1000 to figure out how many Higgs particles were made at either ATLAS or CMS (the two big LHC experiments) by June 2011, and by about 5000 to figure out how many were made through all of 2011. Next year the number produced will probably be double or triple that. Then there are the five curves, showing the five classes of processes, and the production rates predicted in the Standard Model. (The width of the curve shows the uncertainty in the theoretical prediction.) Three of the curves stop at around 300 GeV; that’s not because the processes stop, but because they become too small for us to hope to measure.

Right now, at the end of 2011, there’s nowhere near enough data to learn anything about the Higgs except perhaps the total rate at which it is produced (and even that would involve some guesswork at this point) so really the only thing we’re going to learn in the very near future is whether the Standard Model’s prediction for the largest of the five processes is more or less right. You can see that process (p p –> H; here p stands for “proton”) is so big that if the Higgs mass is, oh, say, 125 GeV, then the number of Higgs particles produced so far is over 50,000 for each experiment! You may well wonder why these particles haven’t already been found. The answer can be found in this article, or you can read this current set of articles through to the end.

Over the coming few years, it will gradually become possible to measure the various processes separately.  Some of the measurements will be easier when the LHC’s energy-per-collision moves up toward 14 TeV in 2014 or 2015.

Let’s go through the five processes.  You can follow along using Figure 2.

First, there is p p –> H, which involves two gluons, one from each proton smashing together to make a Higgs particle (which I’ll call g g –> H). This process is curious,  because gluons and Higgs particles do not directly interact with each other at all (which is why the gluon remains massless even when the Higgs field is non-zero).  But both gluons and Higgs particles interact strongly with top quarks and anti-quarks.  A gluon and a top quark interact through the strong nuclear force.  We also know the top quark and the Higgs field must have a powerful interaction, since the non-zero Higgs field gives top quarks a large mass, and that implies that Higgs particles and top quarks interact powerfully too. So what happens when the gluons hit each other is this: their energy sets up a disturbance in the top quark field (often called a “virtual top quark/anti-quark pair”) and then that disturbance coalesces into a Higgs particle.

What would we learn if this process has a rate that disagrees with the Standard Model prediction? We would learn either (a) that the interaction between the Higgs particle and the top quark is different from expected in the Standard Model, in which case the story of how the top quark got its mass is not as simple as it might have been, or (b) that there are some unknown particles that, like top quarks, also interact with both gluons and top quarks, and contribute in a similar way to this process.   Whether it is (a) or (b), it would be hugely exciting.  So we’d like to measure this production rate as accurately as possible — though unfortunately there’s not much to be gained by doing better than about 15%, which is the current error on the theoretical calculation, as you can see from the width of the blue band on the plot in Figure 1. 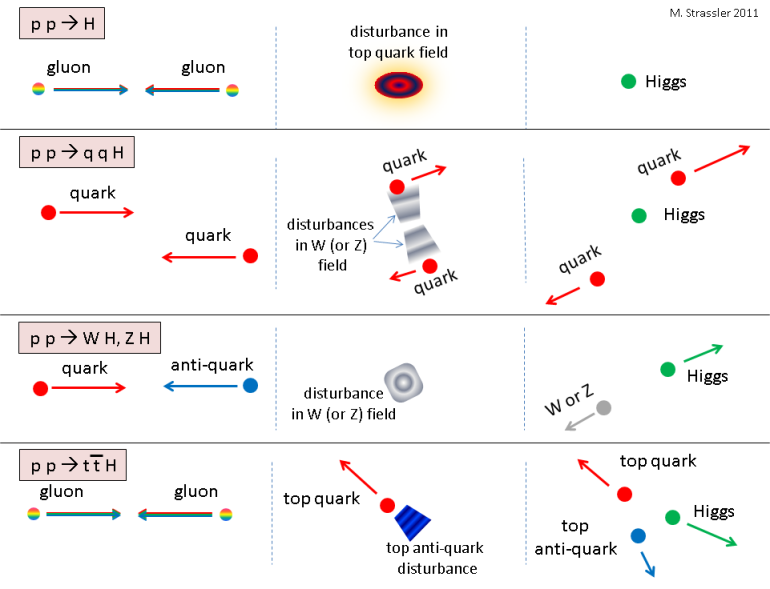 Fig. 2: The five processes for making a Standard Model Higgs particle, labeled as in Figure 1, from most common to least common. In each level, time runs from left to right, with each panel showing a different stage in the process.("Disturbances in fields" are this website's somewhat more accurate and certainly more intuitive term for ``virtual particles'', which are not particles at all.)

Second, about a factor of 10 smaller for a lightweight or middleweight Standard Model Higgs, there is p p –> q q H. What happens in this process is two quarks, one from each proton, bounce off each other, and in the process a Higgs is produced. (Anti-quarks can do this too.) But this happens in one of two curious ways. In one of them, each quark creates a disturbance in the Z field (the field for the Z particle) and these two Z-field disturbances (“virtual Z particles”, they are often called, but they are not particles) coalesce to form a Higgs particle. The other way this happens is very similar, but the disturbance created is in the W field, and the two W disturbances coalesce to form a Higgs particle.

In both cases, the two quarks continue onward, and appear in the experimental detector as jets (i.e. sprays of hadrons, which are particles made from quarks, antiquarks and gluons). Unfortunately, we cannot tell the difference experimentally between the process with Z disturbances from the one with W disturbances, so they are lumped together into that single curve p p –> q q H, which I prefer to call q q –> q q H to remind you that you start with two quarks.

Second, if you have indeed found a Higgs particle but you are not sure if it is of Standard Model type, you have a nice opportunity here to find out. In many models with two or more Higgs particles, the rate for this process is somewhat altered, and it always becomes smaller than in the Standard Model.

So we would really want to measure this precisely too, if we could!

The next two processes, p p –> W H and p p –> Z H, are quite similar to one another, so I’ll describe them together. Here, a quark from one proton and an antiquark from the other proton smash into each other and disappear, and their energy is converted into a disturbance in the W or Z fields (those W and Z virtual `particles’ again.) Then that disturbance falls apart into a Higgs particle and a W or Z particle. Since W and Z particles can (in some cases) be distinguished experimentally, it makes sense to keep track of these two processes separately, which is why they appear as two different curves.

The implications of this process are quite similar to the p p -> q q H case.  The fact that a virtual W particle turns into a W particle and a Higgs tests whether the particle that you’re calling a Higgs particle really does come from the Higgs field that gave mass to the W particle. And just as for p p –> q q H, the rate for this process, if you have a non-Standard Model Higgs particle, can only go down, not up, compared to the Standard Model prediction. One thing that is new here is that if we measure both p p –> W H and p p –> Z H, we can check whether the ratio of the two comes out as expected.

Unfortunately, as you see from the graph, the rates for these processes become rather small as the Higgs becomes heavy.  But they may be quite important if the Higgs turns out to be rather lightweight.

Those are the five production modes that you need to know about… as long as we’re dealing with a Standard Model-type Higgsl.  Non-Standard Model Higgs particles can in some cases be produced in other ways too.

Now unfortunately it is not straightforward just to go out and measure all these five processes. You have to measure what you can, and you measure the Higgs only after it decays, so what you actually measure is the rate for a particular production process multiplied by the probability that the Higgs decays in a particular way. It’s going to be very hard work to extract all the information we want.

17 responses to “Production of the Standard Model Higgs Particle”