Decays of the Standard Model Higgs

The Standard Model Higgs (the simplest possible type of Higgs particle that might be present in nature), decays very rapidly, as do most types of particles. In a time far shorter than the time it takes for light to travel from one side of an atom to the other, a Higgs particle that is produced at the Large Hadron Collider [LHC] will decay to other particles. Which other particles, and with what probabilities?  And why do we care? These are the questions that this article addresses.

The Higgs field (not the Higgs particle, which is just a ripple in the Higgs field) gives mass to all of the known apparently-elementary massive particles: all the quarks, all the charged leptons, the W and Z particle, and even the neutrinos. The only particles it leaves alone are the gluons and the photon (and the presumed graviton). This is all very well understood within the equations of the Standard Model of particle physics, which describe all of these particles and their fields.   It’s clear from those equations that it is impossible for any of these particles to be massive if there isn’t some kind of Higgs field around.

As a consequence of all of this, the Higgs particle interacts directly with the known particles with a strength related to their masses. (As we’ll see, it also has indirect interactions with the gluons and photon, even though they’re massless — but let’s not get ahead of ourselves.) And consequently it decays to pairs of these particles (more precisely, to a particle and its antiparticle) with a rate that is related to their masses, as long as the interaction is direct. Roughly speaking, decays to heavy particles are more likely than those to lightweight particles… though there are caveats to come.

For example, since bottom quarks are much heavier than electrons, a Higgs particle is vastly more likely to decay to a bottom quark and bottom anti-quark than to an electron and a positron. How much more likely? The ratio of the probabilities of the two decays is proportional to the bottom quark mass, divided by the electron mass, squared (and then multiplied by 3, because of the properties of the strong nuclear force), giving

That’s a big number! We can forget about measuring Higgs particles decaying to electrons; we’d need to make at least 200,000,000 of them (actually far, far more), and we’ve probably only made 100,000 or so at this point.

Fig. 1: Predictions for the probabilities of various decays of the lightweight Standard Model Higgs, as a function of the Higgs mass-energy . The blue regions were ruled out by 11/2011 (LEP being the electron-positron collider that ran from 1988 to 2000.) The probabilities on the vertical axis are expressed in standard scientific notation (10 to the -1 means 0.1, 10 to the -2 means 0.01, etc.) The letters "b", "c" and "g" stand for bottom quark, charm quark and gluon; the greek letters gamma and tau stand for photon and tau lepton.

Ok, so let’s look at all the decays of the Standard Model Higgs to all of the available particles. The ATLAS and CMS experiments at the Large Hadron Collider LHC have already excluded a Standard Model Higgs particle between 141 and 470 GeV in mass-energy [E=mc2], and there are reasons to believe the Standard Model Higgs should be below 400 or so from other precision measurements, so for the purposes of this article let’s focus on the lightweight case. In Figure 1 you see the probabilities for such a Higgs to decay to various particles, compiled with the latest methods by the LHC Higgs Cross Section Working Group.

Let’s even be more precise for a 125 GeV Standard Model Higgs; follow me down the graph.

There are three classes of decays in this plot:

First, there are decays through direct interactions to a particle and its antiparticle; see Figure 2. From largest to smallest probability, these are 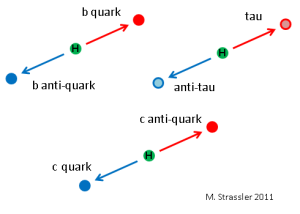 Fig.2 :The Standard Model Higgs particle may decay directly to quarks or leptons; the top quark is too heavy for the lightweight Higgs particle to decay to it and its anti-quark, and the next three heaviest quarks and leptons are the bottom quark, the tau lepton and the charm quark.

There are also other decays, to other quarks and leptons, that are not shown. Why not? You already know why the decay to an electron isn’t shown; why bother? it is far too small to measure. The same is true for muons and for strange, down and up quarks. They are all very lightweight, and their interaction with the Higgs field is therefore very weak, implying that the probability that the Higgs particle decays to them is very small. And why isn’t there a decay to a top quark and antiquark shown? The top quark has a mass of 173 GeV or so, so a Higgs of 140 GeV and below cannot decay to a top quark and a top antiquark. (But see below.)

Second, there are decays through indirect interactions to gluons and to photons. These occur through an effect of “virtual `particles’ ” (which are not really particles at all, but disturbances in the corresponding fields.)   In particular, (see Figure 3) because

the Higgs gets to decay to gluons through the indirect effect of virtual top quark/antiquark pairs (i.e. through a generalized disturbance in the top quark field), and it gets to decay to photons through the indirect effect of virtual top quark/antiquark particles and virtual W particles.  These indirect interactions are quite a bit smaller than the direct ones, which is why these decays are rather rare, especially the decay to photons, which happens only for about 1 in 1000 Higgs particles. There is also a decay to a photon and a Z particle which I didn’t bother to put in Figure 3, but is similar to the case with two photons.

Fig. 3: The middle and lower row show how the Higgs, through an effect of virtual `particle/antiparticle' pairs of top quarks and/or W's (disturbances in the top and W fields), can decay to gluons or photons. Each panel shows a moment in time; time runs from left to right. The top row shows the reverse process by which two gluons can collide and form a Higgs particle; this is the most common way a Higgs particle is produced at the LHC. See https://profmattstrassler.com/articles-and-posts/the-higgs-particle/the-standard-model-higgs/production-of-the-standard-model-higgs-particle/

The solution to this puzzle is this: one has to remember the world is made from quantum fields, and fields can do more than just host particles with a definite mass. This Higgs decay is not to two Z particles, but to one Z particle that is a real particle and to one Z “virtual particle”, which is not a particle at all, but a more generalized disturbance in the Z field.  (A particle is a nicely behaved ripple; a `virtual particle’ can be much more of a messy thing, in general.) Then the Z particle decays (into a charged lepton/antilepton pair, a neutrino/antineutrino pair, or a quark/antiquark pair) and the Z virtual particle falls apart too, in a similar fashion. In the end, we can get, for instance, two charged leptons and two charged antileptons, or a charged lepton/antilepton pair and a quark/antiquark pair. (The same is true for the decays marked WW, except that the final set of particles might be, for instance, a charged lepton, a charged antilepton, a neutrino and an antineutrino.) This is illustrated in Figure 4 both for the case where the Higgs is heavy enough to decay to two Z particles and when it isn’t; the same particles come out in the end, but the particles that come from the Z virtual `particle’ have somewhat smaller energies and momenta than those that come from the real Z particle.   The lighter is the Higgs particle, the harder it becomes to make the virtual Z particle, and the more suppressed is the probability for the process; you can see how this affects ZZ (and WW) in Figure 1, which are much smaller for very light Higgs particles. 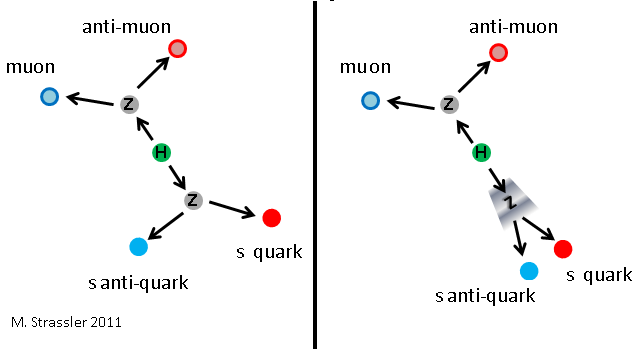 Fig. 4:Left: If the Higgs is heavier than twice the Z particle mass, it may decay to two Z particles. Right: If it is somewhat lighter, it may decay to a Z particle and a `virtual Z particle', a more general disturbance in the Z field. The Z's decay, and the virtual particle does too, into a charged lepton-antilepton pair, a neutrino-antineutrino pair, or a quark-antiquark pair; decays to muon/anti-muon and to a strange quark and anti-quark are (arbitrarily) shown.

You might ask why a Higgs particle can’t decay to a virtual top quark particle and a top antiquark. It can! But the probability is so small it isn’t worth putting on the graph in Figure 1.

Ok, what could we learn if we measured all of the probabilities for the decays shown?

The probabilities for the decays through direct interactions answer the question: do the Standard Model matter quarks and charged leptons get their masses from the Higgs field precisely as the Standard Model’s equations would predict? If any of the decay probabilities are off, that means that certain matter particles in the Standard Model get mass in some more complicated way, and the Higgs particle is not a Standard Model Higgs particle, but something more complicated. Since it is possible that the quarks get their masses one way and the leptons get their masses in a different way, it is very interesting to measure the decay probabilities both for quarks like the bottom quark and for charged leptons like the tau. Measuring the charm quark decay is difficult, unfortunately. Someday we may have enough data to detect the decay to a muon and an anti-muon, but that is a long way off.

The decays to a W particle and a W virtual particle (WW*, for short), and for ZZ* are enormously important, because even if we measure them very imprecisely, they answer the fundamental question: is this particle we are calling a Higgs particle actually a Higgs particle in the first place?! Only a Higgs particle can be expected to have a much larger probability to decay to WW* than it does for its decay to photons or to photon plus a Z.

So each of the decays give us a different and important piece of information about the Higgs particle — in particular,

Some of this information — in particular, how the Higgs interacts with W and Z particles and top quarks — can also obtained from the production modes of the Higgs particle. So it might look as though here is some redundancy here. But first, redundancy is good; even if you expect to get the same answer from two measurements, nature might surprise you and give you different answers, which would mean that there are some novel effects you need to understand. And second, it isn’t possible to measure all of these production modes and decay modes separately. In fact, each measurement of the Higgs’ particle’s properties involves the rate for a particular production process multiplied by the probability of a particular decay process; so to measure production rates and decay probabilities separately is actually very tricky. How to do all that (to the extent possible) is discussed in the third article of this series.

33 responses to “Decays of the Standard Model Higgs”