Here’s the data that convinced the world of particle physics that a new particle, with a mass of 125 GeV/c2 (about 133 times heavier than a hydrogen atom), has been discovered at the Large Hadron Collider [LHC] by the ATLAS and CMS experiments.

I have explained elsewhere how the simplest type of Higgs particle (the Standard Model Higgs) is produced, how it decays, and how it can be sought and studied, and you might want to read these articles if you don’t follow what I’m saying.

Let me start with an oversimplified description of what studies were performed by ATLAS and CMS (the two general purpose detectors at the Large Hadron Collider [LHC]) to make this discovery.  I’ll fill in some of the missing pieces at the end, but as we’ll see, they barely matter for the actual discovery.  These are precisely the studies I described in my video clips from a talk for the public, which you might enjoy watching.

Among the several ways to search for the Higgs particle, the two easiest and most straightforward to interpret are:

At both ATLAS and CMS, the experimental results are completely dominated by these measurements.

The measurements are (leaving out dozens of subtle details) simple:

If a particle of mass M that decays to two photons is present in nature, the plot will show a bump (from the new particle) at the invariant mass M, sitting on a rather smooth background (from other, random processes that can produce two photons); if not, the plot will be rather smooth.  It won’t be perfectly smooth because of statistical jumps up and down, though those jumps will become (relatively speaking) smaller and smaller as more data is taken.  Then do exactly the same thing for the four lepton data.  If you see a bump in both plots, and the bumps are at the same mass M, that’s evidence that you have a new particle decaying both to two photons and to four leptons.

Without further ado, here’s the data (these plots show the combined data taken in 2011 and 2012.) 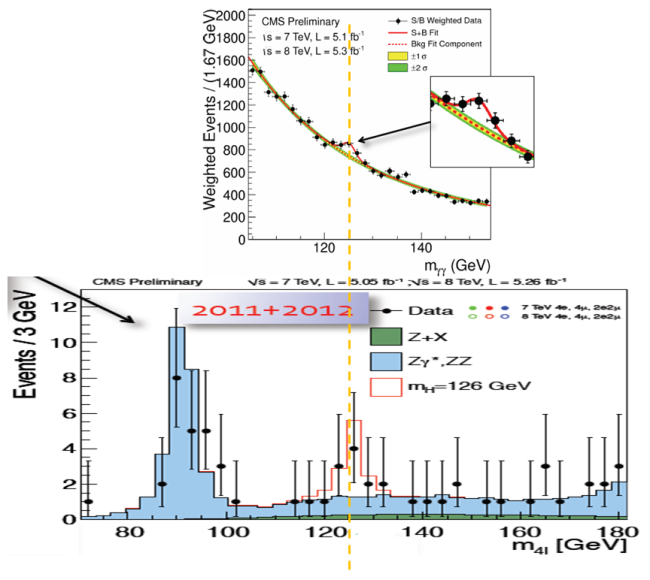 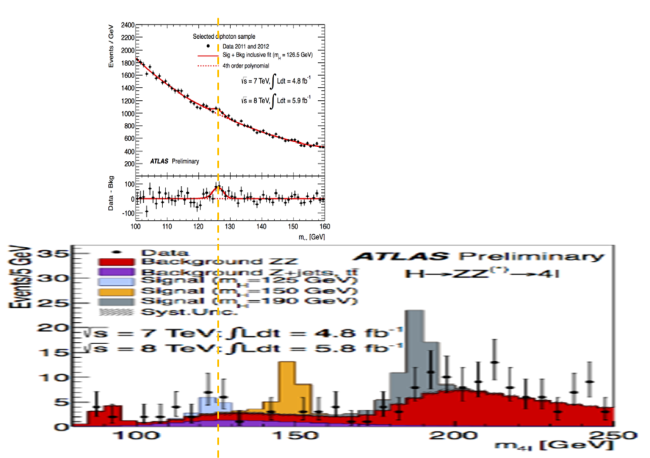 Combined data from 2011 and 2012 taken by the ATLAS experiment. Top: number of collisions producing two photons, as a function of the invariant mass of the two photons. Data points are in black; the dotted red curve is a smooth fit to the data; the red curve shows a fit with a peak included.  Bottom: number of collisions producing two lepton/anti-lepton pairs, as a function of the invariant mass of the two leptons and two antileptons. (Here leptons means only electrons and muons, not taus.) Data points are in black, expected background in red, expected shape and size of a Higgs peak at 125 GeV is in light blue. The peak at 91 GeV is from Z particles decaying to two lepton/anti-lepton pairs, a very rare but measurable process.  The yellow and grey peaks show what a Higgs at higher mass would be expected to look like; notice the data does not fit these peaks.  Both plots show a peak at around 125 GeV consistent with a new particle (possibly a Higgs particle) as indicated by the dotted orange line.

You see there are four bumps, one in each plot, and they are all lying within a GeV of one another.  The chance of this is obviously very small.  You can imagine one, or even two perhaps, of the bumps is due to a mistake or a fluke, but to have both experiments have two mistakes or flukes that sit in the same location is very, very unlikely.  In fact, to have even two bumps in the same location is unlikely.  In short, both experiments have strong evidence, and thus each one can be viewed as confirming the other.

You can also look at the 2011 data and separately look at the 2012 data.  Unfortunately not all the relevant plots were shown, but you can use the plots that show the probability of a fluctuation of a given size to compare the two years, see below.  If you viewed (as I suggested in an earlier post) the 2011 data as telling you that there couldn’t be a simplest Higgs anywhere except near 125 GeV/c2, thereby removing any look-elsewhere effect, and the 2012 data as telling you whether there was an effect in that location, you would still be convinced. 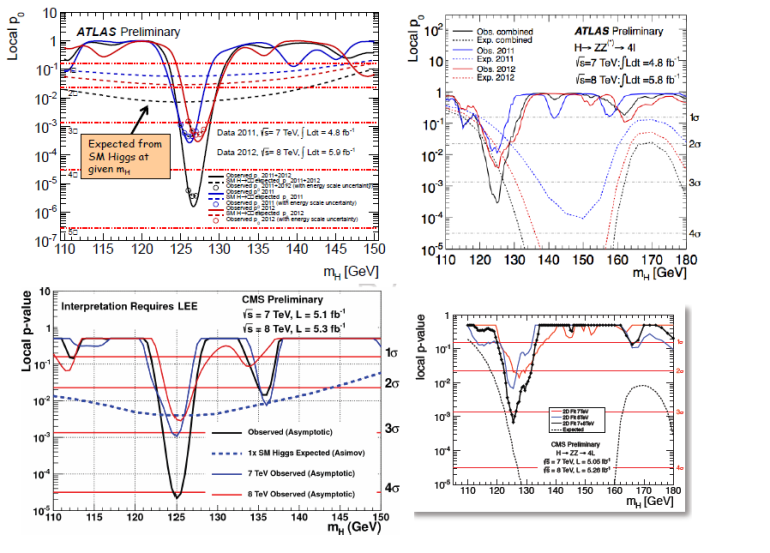 The probability (vertical axis) of a bump at a particular invariant mass (horizontal axis) in the corresponding data plot to be purely due to random chance. Top: ATLAS; Bottom: CMS; Left: Two-photon data; Right: Four-lepton data. Solid curves: 2011 in blue, 2012 in red, combined in black. Dashed curves: expected level of probability for a signal due to a Standard Model Higgs particle of the corresponding mass; if the black solid curve is near the black dashed curve (blue for lower left plot) this indicates consistency with such a Higgs signal.  Notice that in each plot both 2011 and 2012 data indicate an unlikely fluctuation near 125 GeV; nowhere else does anything like this occur.

No matter how you slice and dice this data, it looks good.  And additional confidence comes from the fact that these measurements (unlike those from last December) were done with the signal region near 125 GeV blinded, until a couple of weeks before the announcement.  That doesn’t mean no adjustments and improvements were made afterward, but all of the peaks were first seen when the data was unblinded.

Then there are the more difficult searches,  for Higgs decaying to bottom quark/anti-quark pairs, to tau lepton/anti-lepton pairs, or to a lepton, anti-lepton, neutrino and anti-neutrino (again, `lepton’ means just electron and muon here).  ATLAS did not feel comfortable releasing any of their other searches; only their 2011 studies are available as yet.  That will change.  But CMS did release new results.  For both experiments, none of these searches show as much of a signal as one would naively expect from a simplest Higgs; maybe this means the Higgs isn’t the simplest one — or maybe it is just an effect of low statistics and other problems with these difficult searches.

Note also that the Tevatron experiments CDF and DZero also have data suggesting that the process quark + antiquark –> W + Higgs or Z + Higgs, followed by a Higgs decaying to bottom quark/anti-quark pairs, does indeed occur.  This would tend to counter suggestions that the data from CMS and ATLAS might be showing that this new particle doesn’t interact with bottom quarks and tau leptons.

But to some extent, for the discovery of this new particle, none of the more difficult searches mattered at all — as I always suspected would happen.  The only searches needed for the discovery of this new particle were the two easy ones, and the others, though they might have provided supporting information, played no role.  And that is a good thing.  Had the more difficult searches been essential for this claim of discovery, all sorts of questions about their validity would have been raised — including questions of unconscious bias and other related influences both within the two experiments and between them.  The result would have been much more controversial.  It is the fact that we have four clean bumps, one from each of the easy searches by the two experiments, that gives me, and everyone else in the field, confidence that a new particle has been discovered — one that is consistent with a Higgs.

A commenter quite reasonably asked me to put up the data without the bumps that guide the eye; here it is, very ugly but I had to modify the plots myself by playing games with color etc.  The bumps in 4 leptons are easy to see; the bumps in 2 photons require you fit the data to a smooth curve and look for an excess in some region, which can be a bit hard to do by eye. 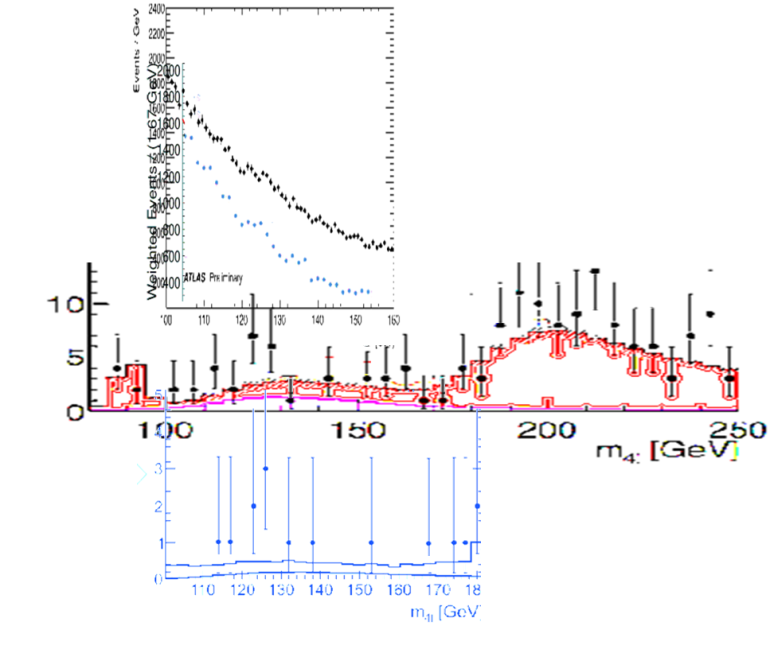 The four data samples as a function of the invariant mass-energy of the measured photons or leptons; lines showing fits to data and expected signal have been surgically removed. Top: two-photon data (ATLAS in black, CMS in blue); Bottom: four-lepton data (ATLAS in black with expected background shown in red, CMS in blue dots with expected background shown as solid blue curve.)  All the data show wiggles, as one would expect just from statistical fluctuations, but in one region the wiggles are a bit larger than usual and all line up — at around126 GeV.

37 responses to “Higgs Discovery: The Data”