Protons, which are the particles smashed together at the Large Hadron Collider [LHC] during most of the year, are made from many quarks, gluons and antiquarks. The proton-proton collisions take place at a definite energy: 7 TeV = 7000 GeV per collision in 2011, 8 TeV = 8000 GeV  in 2012. But what particle physicists are mainly interested in — what can really create new physical phenomena for us to observe — are the collisions of a quark in one proton with an antiquark in the other proton, or the collision of two gluons, etc. These “mini-collisions” carry only a fraction — typically a very small fraction — of the total proton-proton collision energy. How large a fraction can they carry? and what are the motivations for increasing the LHC energy from 7 TeV per collision to 8 TeV?

The answer is given by the figure below. This is a plot showing the number of collisions detected in the ATLAS detector, using its  data through early summer 2011, that involve the scattering of a quark, antiquark or gluon off another quark, antiquark or gluon. Such mini-collisions most often produce two jets (sprays of hadrons which are the manifestation of high-energy quarks, gluons or antiquarks that have been knocked out of their parent protons) and these are observed in ATLAS. (The CMS detector experimenters have made a similar plot, using the collisions that occurred inside CMS.)  The jets’ energies and directions are measured, and from that information it is determined how much energy the original mini-collision must have had in order to produce them. The plot shown is essentially the number of mini-collisions of this type as a function of the energy of the mini-collision.  The vertical axis is logarithmic; each long tickmark is another factor of 10 higher (and 10n indicates a 1 with n zeroes after it; 105 = 100000.)  For instance, the number of mini-collisions observed that had energy between about 1550 and 1650 GeV was about 103 = 1000 (indicated by the blue lines.)  [Note that the plot starts only at an energy of 750 GeV and goes up from there, but the number of mini-collisions keeps rising as you study lower energy jets, all the way down to where the jets are too wimpy to measure.] 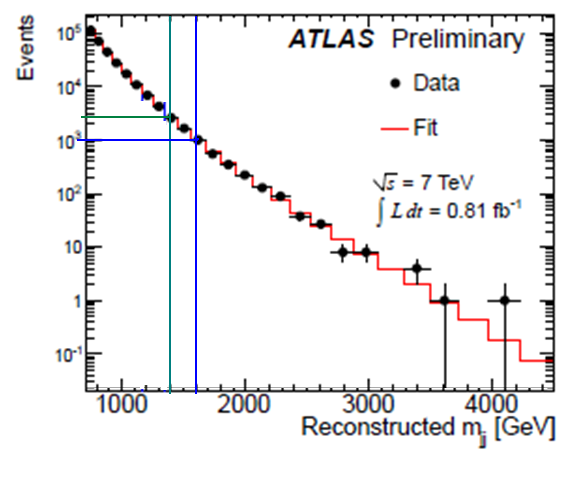 Fig. 1: The number of collisions (notice the vertical axis is logarithmic, increasing by 10 with each large notch) in which quarks/gluons/antiquarks scatter off each other, as a function of the energy (here called "Reconstructed m_jj") of the scattering, within proton-proton collisions at 7000 GeV = 7 TeV. Data points (from the ATLAS experiment) are in black, a fit to the curve is in red. Green and blue lines (added by me) indicate the number of events at 1400 and 1600 GeV, energies which are in a 7 to 8 ratio; what 7 TeV collisions can do at 1400, 8 TeV collisions can (roughly) do at 1600. Notice the horizontal bins are not all the same size, and also that the energy range only extends down to 750 GeV; if it went down to zero the curve would continue to rise rapidly. The total number of proton-proton collisions during this data period was nearly 100,000,000,000,000.

Keep in mind that the total number of 7 TeV = 7000 GeV proton-proton collisions that took place in ATLAS while they were accumulating the data for the plot above was about 100,000,000,000,000.  [The total 2011 data set was 5 times larger, but the corresponding plot won’t appear for a few months.]  Of all these collisions, just two had mini-collisions that passed above 3500 GeV — half the collision energy of the protons.  In principle the energy of the mini-collisions can go up all the way to 7000 GeV, but the probability goes down and down, and it is so rare to get a 6000 GeV mini-collision that chances are we wouldn’t get one even with 100 times this much data.

Now — what are the advantages of going up from 7 TeV per collision, in 2010-2011 LHC running, to 8 TeV in 2012?  The obvious point is that whatever you could do at a given energy E, you can now hope to do it at 8/7 E ~ 1.14 E.  So if before you could hope, with this much data, to see signs of a certain type of hypothetical particle with mass as large as 1000 GeV/c2, now you can hope to reach 1100 GeV/c2 or more with the same amount of data.  So the “reach” of the machine goes up — you can look for particles of slightly higher mass.  And if the total amount of 2012 data turns out to be three times as large as was collected in 2011, then you get more collisions at each energy, and so you might be able to see signs of that hypothetical particle up to a mass of, say, 1200 GeV/c2.

But that’s not all.  Look at the green and blue lines on Figure 1; they are there to guide your eye in seeing what is happening at around 1400 and 1600 GeV, two energies which are in a 7 to 8 ratio.  What this tells you is that at a fixed 7 TeV proton-proton collision energy, the number of quark-quark or quark-gluon or etc. mini-collisions is more than twice as large at 1400 GeV as at 1600.  But when the machine goes up in energy by 8/7, what used to be true of 1400 will now be true of 1600.  In other words, if you are interested in mini-collisions of a fixed energy, the number of them will go up — by a lot more than the 14% increase in the proton-proton collision energy!!  And that means that for any given process with a preferred energy, such as the production of lightweight Higgs particles, which involves energies around 100-200  GeV, you get more bang for your buck.  Going from 7 to 8 TeV means that now, for the same number of proton-proton collisions, you produce more Higgs particles.  The increase for Higgs particle production (if the Higgs mass is at 125 GeV) will be a factor of about 1.5.  For top quarks, and for certain other types of hypothetical particles, the increase is slightly larger.

Fig. 2: If protons really looked something like this, the data shown in Figure 1 would look completely different.

By the way, in case you weren’t really sure about it, Figure 1 gives you a strong indication that protons are not simply made from two up quarks and a down quark, as shown in so many misleading figures, such as Figure 2, taken from Wikipedia.  If they were, you’d expect quarks to carry about a third of the protons’ energy, and most collisions to carry about a third of the proton-proton collisions’ energy: about 2300 GeV.  But you notice that nothing special happens to the curve around 2300 GeV.  There are far more collisions below 2300 GeV than above, and the lower you go, the more collisions you find.  This is because there are huge numbers of gluons and of quarks and antiquarks inside the proton, each carrying a small fraction of the protons’ energies, but so numerous that they are involved in the vast majority of mini-collisions.  That basic feature of the proton is somewhat more accurately illustrated in Figure 3, though the number of low-energy gluons and quark-antiquark pairs is far, far larger than shown in the picture.

Fig. 3: A somewhat more accurate picture of a proton, filled with gluons (g) and quarks (u,d,s for up, down and strange) and antiquarks (same letters but with an overline bar.) These particles are whizzing around at speeds that are a significant fraction of the speed of light. The number of gluons and quark-antiquark pairs is enormously understated, for reasons of clarity. (If you look carefully, you'll see there are two more up quarks than up antiquarks, and one more down quark than down antiquark; that EXCESS of two up quarks and one down quark is what leads to the shorthand: "a proton is made from two up quarks and one down quark.")