Synopsis of the OPERA Situation

I thought I’d better try to clarify what the logical issues are regarding OPERA before things get too confusing.  [Read the previous post first.] What’s going on is sketched in the Figure below.

a) In September (and confirmed in November) OPERA claimed to have found that, compared to expectations, neutrinos from CERN seemed to be arriving early, by about 60 nanoseconds, with a six sigma significance.  That is sketched in the figure as a bar, centered at 60 nanoseconds, with a width of 10 nanoseconds in each direction (so if you made the bar six times larger its bottom would reach zero nanoseconds.)    Such a result is convincing — convincing that either they made a mistake or they’ve discovered a new effect in nature.  The new effect in this case — neutrinos going faster than the universal speed limit — is very implausible for many reasons that I’ve covered in the past, but such an experimental result cannot simply be ignored. 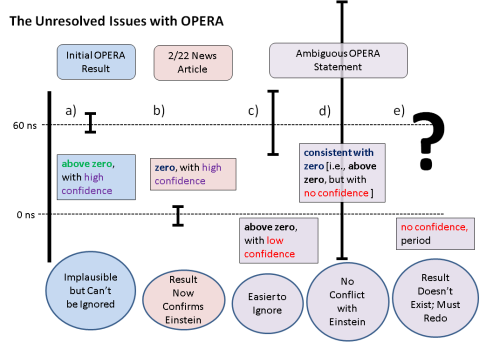 (a) What OPERA said originally. (b) What yesterday's newspaper article claimed OPERA was now saying. (c),(d),(e) Three possible interpretations of OPERA's statement. In each case, a bar whose center lies at the most likely result of the measurement, and whose width indicates the degree of uncertainty, is shown. If we take OPERA's statement at face value, we still don't know if it is inconsistent with zero but less certain than before, consistent with zero, or simply unknown (in which case the previous measurement must be discarded.)

b) On February 22nd, a news report said that OPERA had found a mistake — a problem with the connection in an optical fiber — that explained the 60 nanosecond shift.  That would mean that the result was now — with confidence — consistent with Einstein’s relativity.

But the OPERA statement contradicts b).  Unfortunately it doesn’t clarify whether we have the situation c), d) or e):

c) The uncertainty on the result is larger than it was before, although the result is still not particularly consistent with what you would expect from Einstein’s relativity.  However, the reduced confidence in the result would mean that instead of it being an impressive result it would become a much less impressive one, much easier to ignore.

d) The uncertainty on the result is so much larger than it was before that the result is actually consistent with Einstein’s relativity, though so weak that it can’t distinguish at all between zero and the original non-zero value that OPERA claimed.

e) There is no sensible estimate of the uncertainty on the result. The result simply cannot be used and will have to be discarded.

From the point of view of the plausibility of the original OPERA result, (b), (c), (d) and (e) are all bad.  From the point of view of the experiment’s credibility, though, case (b) would look the best: the experimenters could at least say that they figured out what they did wrong and knew what it was.  Cases (c), (d) and (e) are increasingly bad; they indicate less and less knowledge of how their own experiment worked.  [But see the first comment below, which criticizes the way I expressed this, and emphasizes that a lack of knowledge is not always the fault of the experimenters.]  However, the situation might change over time; right now they might be in case (d) [because they’re still working on understanding what happened] but soon it might switch to case (b), or back to case (a), once they have it straight.  So we do have to let things play out a little bit, and not jump to conclusions.

But I think it is clear we are not currently in case (b).  Because if we were, why would one would emphasize the re-running of the experiment?  There would be no need.

This entry was posted in Particle Physics and tagged neutrinos, OPERA, press, superluminal. Bookmark the permalink.

27 responses to “Synopsis of the OPERA Situation”