While the eastern half of the United States is having a cold winter so far, the same has not been true in Italy. The days I spent teaching in Florence (Firenze), at the Galileo Galilei Institute (GGI), were somewhat warmer than is apparently the usual, with even low temperatures far above freezing almost every night. A couple of people there said to me that they “hadn’t seen any winter yet”. So I was amused to read, on U.S. news websites, yet more reports of Americans uselessly debating the climate change issue — as though either the recent cold in the eastern U.S. or the recent warmth in Europe can tell us anything relevant to that discussion. (Here’s why it can’t.) It does seem to be widely forgotten in the United States that our country occupies only about 2% percent of the area of the Earth.

Of course the warmer Italian weather made my visit more pleasant, especially since the GGI is 20 minutes up a long hill — the Arcetri hill, of particular significance in scientific history. [I am grateful to the GGI, and the scientist- organizers of the school at which I taught, especially Stefania de Curtis, for making my visit to Arcetri and its sites possible.] The University of Florence used to be located there, and there are a number of astronomical observatories on the hill. And for particle physics, there is significance too. The building where I was teaching, and that hosts the GGI, used to be the department of Physics and Astronomy of the university. There, in 1925, Enrico Fermi, one of the greatest physicists of the 20th century, had his first professorial position. And while serving in that position, he figured out the statistical and thermodynamic properties of a gas made from particles that, in his honor, we now call “fermions”.  [His paper was recently translated into English by A. Zannoni.]

All particles in our world — elementary particles such as electrons and photons, and more complex objects such as atoms — are either fermions or bosons; the classic example of a fermion is an electron. The essential property of fermions is that two identical fermions cannot do precisely the same thing at the same time. For electrons in atoms, this is known as the Pauli exclusion principle (due to Wolfgang Pauli in 1925, based on 1924 research by Edmund Stoner): no two electrons can occupy the same quantum state. All of atomic physics and chemistry, and the very stability of large chunks of matter made from atoms, are dependent upon this principle. The properties of fermions also are crucial to the stability and structure of atomic nuclei, the existence of neutron stars, the electrical properties of metals and insulators, and the properties of many materials at cold temperatures.

Inside the building is a plaque commemorating Fermi’s great achievement. But Fermi did not remain long in Florence, or even in Italy. A mere 15 years later, in the midst of the Fascist crisis and war in Europe, and having won a Nobel Prize for his work on radioactive atoms, Fermi had taken a position in the United States. There he directly oversaw the design, building and operation of humanity’s first nuclear reactor, in a secret underground laboratory at the University of Chicago, paving the way for the nuclear age.

But the main reason the Arcetri hill is famous for science is, ironically, because of a place of religion.

Both of Galileo’s daughters had taken the veil, and in 1631 the aging scientist was prompted to rent a villa on a small farm, within sight and a short walk of their nunnery.  Unfortunately, what must have seemed like an idyllic place to grow old and do science soon turned into a nightmare. After years of coexistence with and even support from within the Catholic Church, he had pushed too hard; his publication in 1632 of a comparison of the old Ptolemaic view of the universe, with the Earth at the center, with the newer Copernican view (to which he had greatly contributed, through his astronomical discoveries, in the 1610s), engendered a powerful backlash from some who viewed it as heretical. He was forced to spend 1633 defending himself in Rome and then living in exile in Sienna. When he was allowed to return to Arcetri in 1634, he was under house arrest and not allowed to have any scientific visitors. Shortly after his return, his 33-year-old daughter, with whom he was very close, died of a sudden and severe illness. His vision failed him, due to unknown diseases, and he was blind by 1638. Unable to go to Florence, his home town, scarcely three miles away, and rarely able to meet visitors, he spent the rest of his time in Arcetri isolated and increasingly ill, finally dying there in 1642.

Yet despite this, or perhaps because of it, Galileo’s science did not come to a halt. (This was also partly because of the his support from the Grand Duke of Tuscany, who interceded on his behalf to allow him some scientific assistance after he went blind.) At Arcetri, Galileo discovered the moon did not always present exactly the same face toward the Earth; it appears, to us on Earth, to wobble slightly. The explanation for this so-called “lunar libration” awaited Issac Newton’s laws of motion and of gravity, just 50 years away. And he finished formulating laws of motion (which would also later be explained by Newton), showing that (on Earth) objects tossed into the air follow a trajectory that mathematicians call a parabola, until affected by what we now call “air resistance”, and showing that uniform motion cannot be detected — the first Principle of Relativity, authored 270 years before Einstein presented his revision of Galileo’s ideas. 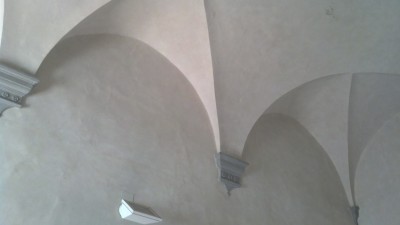 Vaulted ceiling in the main entry hall of Galileo’s rented villa in Arcetri. (No, the light fixture is not original.) [Credit: M. Strassler]

To step into Galileo’s villa, as I did a few days ago, is therefore to step into a place of intense personal tragedy and one of great scientific achievement. One can easily imagine him writing by the window, or walking in the garden, or discussing the laws of motion with his assistants, in such a setting. It is also to be reminded that Galileo was not a poor man, thanks to his inventions and to his scientific appointments. The ceilings of the main rooms on the lower floor of the villa are high and vaulted, with attractively carved supports. There is a substantial “loggia” on the upper floor — a balcony, with pillars supporting a wooden roof, that (facing south-east, south and west) would have been ideal, while Galileo could still see, for observing the Moon and planets.

While Galileo’s luck ran badly in his later years, he had an extraordinary string of luck, as a younger scientist, at the beginning of the 1600s. First, in 1604, there was a supernova, as bright as the planet Jupiter, that appeared in the sky as a very bright new star. (Humans haven’t seen a correspondingly close and bright supernova since then, not even supernova 1987a.  There is one you can see with a small telescope right now though.) Observing that the glowing object showed no signs of parallax (see here for a description of how parallax can be used to determine the distance to an object), Galileo concluded that it must be further away than the Moon — and thus served as additional evidence that the heavens are not unchanging. Of course, what was seen was actually an exploding star, one that was nearly a trillion times further from the Earth than is the Moon — but this Galileo could not know.

Next, just a few years later, came the invention of the telescope. Hearing of this device, Galileo quickly built his own and figured out how to improve it. In the following years, armed with telescopes that could provide just 20-times magnification (typical binoculars you can buy can provide 10-times, and with much better optical quality than Galileo’s assistants could manufacture) came his great string of astronomical discoveries and co-discoveries:

One often hears 1905 referred to as Einstein’s miracle year, when he explained Brownian motion and calculated the size of atoms, introduced the notion of quanta of light to explain the photoelectric effect, and wrote his first two papers on special relativity. Well, one could say that Galileo had a miracle decade, most of it concentrated in 1610-1612— playing the decisive role in destroying the previously dominant Ptolemaic view of the universe, in which the Sun, Moon, planets and stars orbit in a complex system of circles-within-circles around a stationary Earth.

We live in an era where so much more is known about the basic workings of the universe, and where a simple idea or invention is rarely enough to lead to a great change in our understanding of our world and of ourselves. And so I found myself, standing in Galileo’s courtyard, feeling a moment of nostalgia for that simpler time of the 17th century, cruel and dangerous as it was… a time when a brilliant scientist could stand on the balcony of his own home, looking through a telescope he’d designed himself, and change the world-view of a civilization.

Looking across the enclosed courtyard of the villa, at the second-floor loggia. It is not difficult to imagine Galileo standing there and peering into his telescope. [Credit: M. Strassler]