Gravitational waves are now the most important new tool in the astronomer’s toolbox.  Already they’ve been used to confirm that large black holes — with masses ten or more times that of the Sun — and mergers of these large black holes to form even larger ones, are not uncommon in the universe.   Today it goes a big step further.

It’s long been known that neutron stars, remnants of collapsed stars that have exploded as supernovas, are common in the universe.  And it’s been known almost as long that sometimes neutron stars travel in pairs.  (In fact that’s how gravitational waves were first discovered, indirectly, back in the 1970s.)  Stars often form in pairs, and sometimes both stars explode as supernovas, leaving their neutron star relics in orbit around one another.  Neutron stars are small — just ten or so kilometers (miles) across.  According to Einstein’s theory of gravity, a pair of stars should gradually lose energy by emitting gravitational waves into space, and slowly but surely the two objects should spiral in on one another.   Eventually, after many millions or even billions of years, they collide and merge into a larger neutron star, or into a black hole.  This collision does two things.

It’s possible that we’ve seen the light from neutron star mergers before, but no one could be sure.  Wouldn’t it be great, then, if we could see gravitational waves AND electromagnetic waves from a neutron star merger?  It would be a little like seeing the flash and hearing the sound from fireworks — seeing and hearing is better than either one separately, with each one clarifying the other.  (Caution: scientists are often speaking as if detecting gravitational waves is like “hearing”.  This is only an analogy, and a vague one!  It’s not at all the same as acoustic waves that we can hear with our ears, for many reasons… so please don’t take it too literally.)  If we could do both, we could learn about neutron stars and their properties in an entirely new way.

Today, we learned that this has happened.  LIGO , with the world’s first two gravitational observatories, detected the waves from two merging neutron stars, 130 million light years from Earth, on August 17th.  (Neutron star mergers last much longer than black hole mergers, so the two are easy to distinguish; and this one was so close, relatively speaking, that it was seen for a long while.)  VIRGO, with the third detector, allows scientists to triangulate and determine roughly where mergers have occurred.  They saw only a very weak signal, but that was extremely important, because it told the scientists that the merger must have occurred in a small region of the sky where VIRGO has a relative blind spot.  That told scientists where to look.

The merger was detected for more than a full minute… to be compared with black holes whose mergers can be detected for less than a second.  It’s not exactly clear yet what happened at the end, however!  Did the merged neutron stars form a black hole or a neutron star?  The jury is out.

At almost exactly the moment at which the gravitational waves reached their peak, a blast of gamma rays — electromagnetic waves of very high frequencies — were detected by a different scientific team, the one from FERMI. FERMI detects gamma rays from the distant universe every day, and a two-second gamma-ray-burst is not unusual.  And INTEGRAL, another gamma ray experiment, also detected it.   The teams communicated within minutes.   The FERMI and INTEGRAL gamma ray detectors can only indicate the rough region of the sky from which their gamma rays originate, and LIGO/VIRGO together also only give a rough region.  But the scientists saw those regions overlapped.  The evidence was clear.  And with that, astronomy entered a new, highly anticipated phase.

Already this was a huge discovery.  Brief gamma-ray bursts have been a mystery for years.  One of the best guesses as to their origin has been neutron star mergers.  Now the mystery is solved; that guess is apparently correct. (Or is it?  Probably, but the gamma ray discovery is surprisingly dim, given how close it is.  So there are still questions to ask.)

Also confirmed by the fact that these signals arrived within a couple of seconds of one another, after traveling for over 100 million years from the same source, is that, indeed, the speed of light and the speed of gravitational waves are exactly the same — both of them equal to the cosmic speed limit, just as Einstein’s theory of gravity predicts.

Next, these teams quickly told their astronomer friends to train their telescopes in the general area of the source. Dozens of telescopes, from every continent and from space, and looking for electromagnetic waves at a huge range of frequencies, pointed in that rough direction and scanned for anything unusual.  (A big challenge: the object was near the Sun in the sky, so it could be viewed in darkness only for an hour each night!) Light was detected!  At all frequencies!  The object was very bright, making it easy to find the galaxy in which the merger took place.  The brilliant glow was seen in gamma rays, ultraviolet light, infrared light, X-rays, and radio.  (Neutrinos, particles that can serve as another way to observe distant explosions, were not detected this time.)

And with so much information, so much can be learned!

Most important, perhaps, is this: from the pattern of the spectrum of light, the conjecture seems to be confirmed that the mergers of neutron stars are important sources, perhaps the dominant one, for many of the heavy chemical elements — iodine, iridium, cesium, gold, platinum, and so on — that are forged in the intense heat of these collisions.  It used to be thought that the same supernovas that form neutron stars in the first place were the most likely source.  But now it seems that this second stage of neutron star life — merger, rather than birth — is just as important.  That’s fascinating, because neutron star mergers are much more rare than the supernovas that form them.  There’s a supernova in our Milky Way galaxy every century or so, but it’s tens of millenia or more between these “kilonovas”, created in neutron star mergers.

If there’s anything disappointing about this news, it’s this: almost everything that was observed by all these different experiments was predicted in advance.  Sometimes it’s more important and useful when some of your predictions fail completely, because then you realize how much you have to learn.  Apparently our understanding of gravity, of neutron stars, and of their mergers, and of all sorts of sources of electromagnetic radiation that are produced in those merges, is even better than we might have thought. But fortunately there are a few new puzzles.  The X-rays were late; the gamma rays were dim… we’ll hear more about this shortly, as NASA is holding a second news conference.

Some highlights from the second news conference: 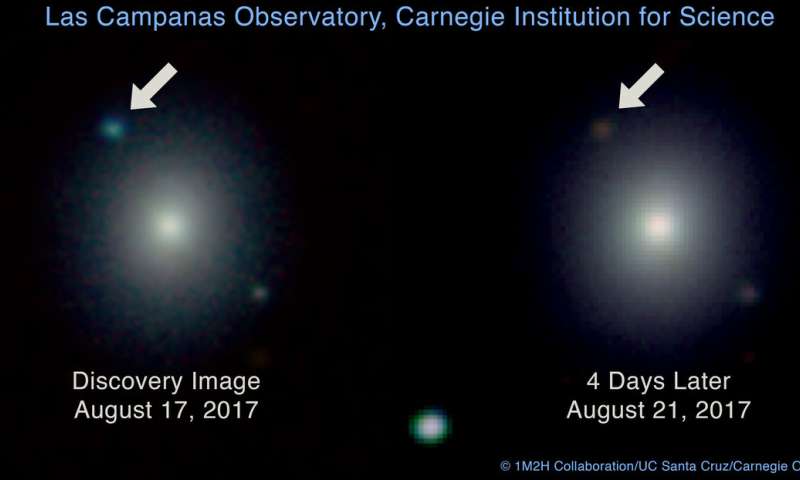 This entry was posted in Astronomy, Gravitational Waves. Bookmark the permalink.

44 responses to “A Scientific Breakthrough! Combining Gravitational and Electromagnetic Waves”