One of the important things to know about jets [sprays of hadrons that are the manifestation of high-energy quarks, anti-quarks and gluons] is that most quarks, anti-quarks and gluons turn into jets that look pretty much the same. But one of the other important things to know is that there are exceptions to that truism. Jets from bottom quarks or anti-quarks, and to a much lesser extent from charm quarks and anti-quarks, can be distinguished from other jets. Let’s see how it’s done. It’s all because of a fortunate accident.

Most particles decay, but it is very important to look at what their average lifetimes are, because that determines how far a fast one (traveling at a substantial fraction of the speed of light) can go before it falls apart. The various quarks have very different lifetimes.

The distance that bottom quarks typically can travel, and occasionally charm quarks too, turns out to be an ideal distance for detection by the LHC detectors ATLAS and CMS, and the Tevatron detectors CDF and DZero, and many other experiments too. Let’s see how this works.

Fig. 1: (Left) in a proton-proton or proton-anti-proton collision, a bottom quark ("b quark" for short) is created; (Center) a bottom hadron forms around the bottom quark; (Right) After traveling a great distance (relative to the previous panels), a fraction of a millimeter, the bottom quark decays (inset) to two lighter quarks and an antiquark, and this causes the bottom hadron to fragment into many lighter hadrons, none of which are bottom hadrons. See many text for more details.

In the middle of Figure 1 we discover that while traveling out of the collision region, the bottom quark has surrounded itself (as a result of strong nuclear forces — see the discussion of jets to understand a bit of why this happens) with an anti-quark (perhaps an up, down or strange anti-quark) and lots of other quarks and anti-quarks and gluons. We call this messy object that surrounds the bottom quark a “hadron” in general, and more specifically a “bottom hadron.” (It might be a “B meson” or a “B baryon”; the latter is like a proton or neutron but with one down quark replaced with a bottom quark.) As in the previous panel in the Figure, there are actually lots of other hadrons coming out from the collision point, but we’re ignoring them to focus on this one.

[Hadrons are complicated; there’s no way around it. The proton is a classic example, and you can learn about its complications here and here and here.]

On the right of Figure 1, we step back — waaaaaaaaaaaaaaaaaaaaaay back. Notice the change in scale!!! What was previously the size of the proton is now a tenth of a millimeter. The hadron is now so tiny that if I drew it to scale you wouldn’t be able to see it at all, so I’ve drawn it much, much, much bigger than it really is. But I’ve indicated how it has rushed away from the collision point (also drawn too large, so you can see it). And at a distance of a few tenths of a millimeter, the bottom hadron falls apart, into half a dozen to a dozen other hadrons, none of which contain a bottom quark.

Why did this happen? That is shown within the inset at right of Figure 1. The reason the bottom hadron fell apart into other hadrons is that the bottom quark itself fell apart into a two quarks and an anti-quark — for instance a charm quark, a down quark and an up anti-quark. The reason so many hadrons are produced in the bottom-hadron’s decay is partly related to why jets form; the strong nuclear force is responsible for many complicated effects, and this is yet another one!  But there’s more to this story, which gets rather long; let’s skip it for now. 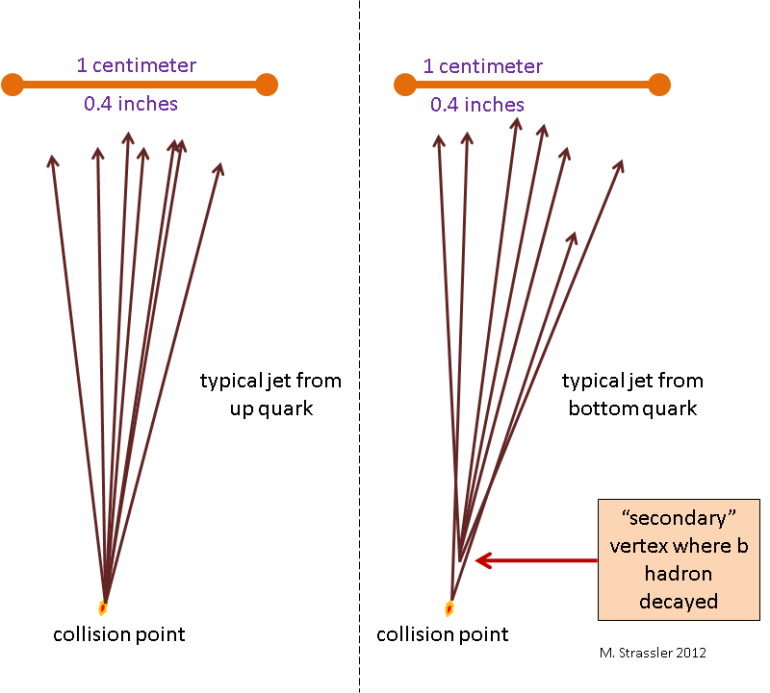 Fig. 2: The hadrons in most jets (left) will all originate at the collision point. But in a jet from a bottom quark (right) the bottom hadron will travel far enough before it decays that some of the hadrons, when observed carefully in the detector at distances of centimeters to meters, can be determined to not have originated at the collision point, and even to have originated at a ``secondary vertex'', which indicates the location where the bottom hadron must have decayed.

Now how do you “b-tag” a jet — i.e., identify it as likely to have come from a bottom quark or anti-quark? You measure the trajectories of the hadrons very precisely, using the tracking systems that ATLAS, CMS, CDF and DZero (and many other experiments) all have. Now, that’s not quite a simple as it sounds. First, you can’t measure anything about the trajectories until the hadrons have traveled a few centimeters, so you don’t see the bottom hadron directly; it decays long before it exits the metal pipe in which the proton and anti-proton beams travel. Also, with modern trackers, you only “catch a glimpse” of the hadron every few centimeters or so, as it travels outward; knowledge of the track isn’t continuous. But still, you can reconstruct the track for each hadron that makes its way through the tracker, in a sort of “connect the dots” approach.  And by making very precise measurements of all the tracks, you can detect that some of the tracks in the jet did not come from the original collision point, i.e. that the  jet looks more like the one on the right of Figure 2 than the one on the left.

By the way, you can determine the original collision point by tracking other hadrons coming from other jets (not shown) and from the debris from the proton-proton collision (also not shown).

So that’s it. That’s how “b-tagging” is done. In principle it is not really very sophisticated. You simply

If they do, that’s a sign that there was a hadron in that jet that traveled a good fraction of a millimeter, and there’s a good chance (not a guarantee) that this was from a bottom quark or anti-quark.

Of course then you make b-tagging much more sophisticated by playing all sorts of additional subtle and clever tricks. That gets very technical, so suffice it to say that by the time the experimentalists have managed to get the most efficient b-tagging possible, it’s far beyond what they can explain to me, much less me pass on to you.  We non-experts basically have to trust that they know what they’re doing…  and the successes of the Tevatron and the LHC where b quarks are concerned suggest that they do.