Neutrinos — just like the charged leptons (electron, muon, tau), the up-type quarks (up, charm, top), and the down-type quarks (down, strange, bottom) — come in three types.  But there’s more than one way to divide them up. And thanks to the quantum nature of our world, you can only use one way at a time.   In this article I’ll explain this remark, and how a very interesting and scientifically crucial phenomenon — neutrino oscillations — arises from this fact.

You probably think of particles as having a definite mass — all electrons have a mass-energy (E=m c2) of 0.000511 GeV — and from one point of view, the three types of neutrinos are no exception. We can classify the three neutrinos by their masses (still largely unknown, see below), and call them, from lightest to heaviest, neutrino-1, neutrino-2 and neutrino-3. We’ll call this the mass-classification, and these types of neutrinos as mass-type. 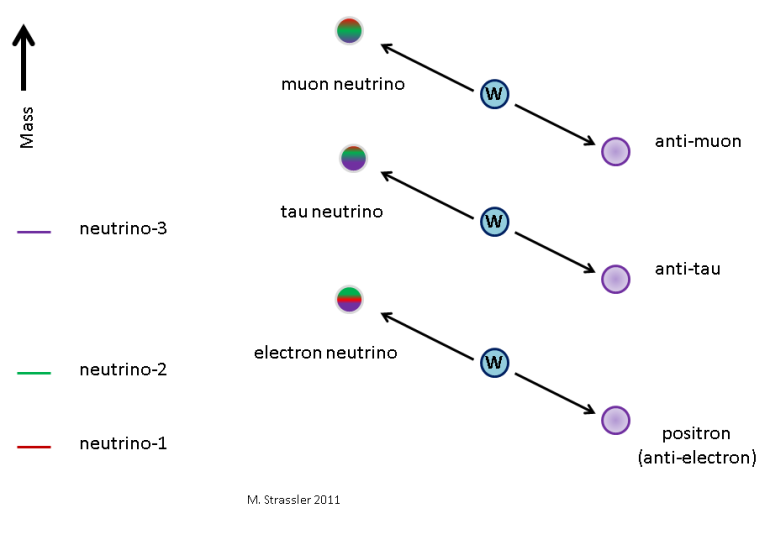 But another way to classify the neutrinos is by how they are connected with the charged leptons (the electron, the muon and the tau.)  [This shows up in my article on what the known particles would look like if the Higgs field were zero.]  The best way to understand this is to focus on how the neutrinos are affected by the weak nuclear force, which is reflected in their interactions with the W particle. A W particle is very heavy, and if you make one, it can sometimes decay (see Figure 1) to one of the three charged anti-leptons and one of the three neutrinos. If the W decays to an anti-tau, the neutrino produced in association with it is a tau-neutrino. Similarly, if the W decays to an anti-muon, a muon-neutrino is emitted. (As is crucial in making a neutrino beam,  a pion decays through the weak interactions, and positively-charged pions make an anti-muon and a muon-neutrino.) And if the W decays to a positron, out comes an electron-neutrino. We’ll call this the weak-classification, and these neutrinos weak-type, since it is the weak nuclear force that determines their details.

What’s the big deal?  We use multiple classifications of people all the time. We talk about people being young, middle-aged and old; or we talk about them being tall, average-height and short. But with people, we can always separate them further, if we choose, into nine categories: young and tall, young and average-height, middle-aged and short, old and short, etc.   Yet quantum mechanics prohibits us from doing the same for these neutrino classifications. There is no such thing as a neutrino that is both a muon-neutrino and a neutrino-1; there is no such thing as a tau-neutrino-3. If I tell you a neutrino’s mass (and therefore that it is neutrino-1, -2 or -3) I simply cannot tell you if it is an electron-, muon- or tau-neutrino. In fact, a neutrino of definite mass-type is a mixture, or “superposition”, of the three weak-type neutrinos.   Each mass-type neutrino — neutrino-1, neutrino-2 and neutrino-3 — is a precise but different mixture of electron-, muon- and tau-neutrino.

The reverse is also true. If I see a pion decay to an anti-muon and a neutrino,  I know immediately that the neutrino emitted was a muon-neutrino — but I can’t know its mass, because it is a mixture of neutrino-1, neutrino-2 and neutrino-3. The electron-neutrino and tau-neutrino are also precise but different mixtures of the three neutrinos of definite mass.

The relation between these mass-types and weak-types is more like (but not exactly like) the relation between classifying highways as “north/south” and “east/west”, (as the US government does, assigning odd numbers to N/S highways and even to E/W roads) versus describing them as “north-east/south-west” or “south-east/north-west”. There might be good reasons to use either one: the N/S-E/W classification is good if you want to focus on latitude and longitude, while NE/SW-SE/NW might be more convenient in the vicinity of a coastline that itself runs from southwest to northeast. But either way, you cannot use both classifications at the same time. A northeastward road is both partly a north road and partly an east road; you cannot say it is one or the other. And a northward road is a mixture of a northeast road and a northwest road. So it is with neutrinos: a mass-type neutrino is a mixture of weak-type neutrinos, and a weak-type neutrino is similarly a mixture of mass-type neutrinos.  (Where this breaks down as an analogy is that you could, if you wanted, use a more refined four-category N/S-NE/SW-E/W-SE/NW classification for roads; the analogous option is not available for neutrinos.)

This inability to classify a neutrino as being of definite mass-type and of definite weak-type simultaneously is an example of the “Uncertainty Principle”, similar to the weirdness that makes it impossible to know the position of a particle exactly and simultaneously know the particle’s velocity exactly. If you know one of these quantities perfectly, you have no clear knowledge of the other.   Or you can learn something, but not everything, about both.  Quantum mechanics tells you exactly how well you can balance your knowledge against your ignorance. By the way, these issues aren’t special to neutrinos. They occur with some other particles too. But they are especially important for the behavior of neutrinos.

A few decades ago, times were simpler. Then it was thought neutrinos might be massless, in which case the weak-type neutrino classification would suffice. And if you look at old papers or at old books for lay-people, you’ll see only the names electron-neutrino, muon-neutrino and tau-neutrino. However, after the discoveries of the 1990s, this no longer suffices.

Now here’s where it starts to get interesting.  Suppose you start with a high-energy neutrino of electron-type,  so that it is a particular mixture of neutrino-one, neutrino-two and neutrino-three. The neutrino propagates through space, but within it, its three different mass-types travel at very, very slightly different velocities, all of them very close to the speed of light. Why is that? Because the speed of an object depends both on its energy and on its mass, and the three mass-types have different masses.  [Click here for the relevant (simple) formulas.]  The velocity difference is super tiny for any neutrinos we have a hope of measuring — it’s never been observed — but it has a surprising and big effect anyway!

And here’s where it goes from just interesting to very weird.

Fig. 2: An electron neutrino is a mixture of the three mass-type neutrinos, which, due to their differing masses, will travel at slightly different velocities. This means that the electron-neutrino will evolve into a mixture of the three weak-type neutrinos, and back into an electron neutrino. (Actually this is oversimplified, as the oscillation of three neutrino types typically has two frequencies, not one as shown here.) This effect, sensitive to differences in the squares of neutrino masses and to the mixing between mass-type and weak-type neutrinos, can be measured and serves as a powerful probe of neutrino properties.

There’s one more really important effect that complicates and enriches the story. Because ordinary matter is made from electrons but not from muons and taus, electron-neutrinos have different interactions with ordinary matter than muon- and tau-neutrinos do. These interactions, which occur through the weak nuclear force, are really, really tiny.  But if a neutrino passes through a great deal of matter (such as a substantial fraction of the earth or sun) these small effects can add up and have a big impact on the oscillations. Fortunately, we know enough about the weak nuclear force to predict this effect in detail, and to work backwards from what we measure in an experiment to figure out what the neutrinos’ properties must be.

All if this involves quantum mechanics. If it doesn’t seem intuitive to you, relax; it isn’t intuitive to me either.  Any intuition I have I learned from the equations.

It turns out that careful measurements of neutrino oscillations are in fact the fastest way to learn about the properties of neutrinos!  Nobel prizes have already been won for this work. Indeed, the whole story I’ve been telling you arose out of a classic interplay between experiment and theory that has stretched from the 1960s through to the present. Let me mention a number of important measurements that have been crucial.

For one thing, we can study electron-neutrinos produced in the center of the sun, in its well-understood nuclear furnace. These neutrinos travel outward through the sun and through empty space to earth. It has been found that by the time the neutrinos arrive at the earth, they are just about as likely to be of muon- or tau-type as of electron-type. That by itself is evidence for neutrino oscillation, and the detailed pattern gives us some precise information about the neutrinos.

We also have muon-neutrinos produced in the decay of pions that are in turn produced in cosmic rays. (High energy particles from space hit atomic nuclei high up in the atmosphere; the showers of debris include many pions, many of which decay to muon-neutrinos and anti-muons, or to muon-anti-neutrinos and muons.) Some of these neutrinos (and anti-neutrinos) are detected in our neutrino detectors, and we can see what fraction of them are electron-neutrinos (and anti-neutrinos) as a function of how much earth they traveled through to get to the detectors. Again, this gives us significant insights into how neutrinos behave.

These “solar” and “atmospheric” neutrinos have taught us much about neutrinos in the last twenty years (and the first hint of something interesting goes back nearly 50 years.)  And these natural neutrino sources have been supplemented by numerous studies done with neutrino beams, such as the one used in the OPERA experiment, and with neutrinos from ordinary nuclear reactors. Each of these measurements has largely agreed with the standard interpretation of the solar and atmospheric neutrinos, and has allowed more precise measurements of the mixtures of the mass-type and weak-type neutrinos and the differences of the squares of the mass-type neutrinos’  masses.

As you would expect with any group of experiments, there are some small discrepancies from theoretical expectations, but none of them have been confirmed, and most if not all are probably just statistical accidents or experimental problems.  So far there is nothing that has been confirmed by multiple experiments that contradicts this understanding of neutrinos and their behavior.  But conversely, this picture is new enough and poorly-enough tested that it is possible, though perhaps unlikely, that there are completely different interpretations. Indeed some serious alternatives have been suggested. So clarifying the details of neutrino properties remains an area of active research, one in which a consensus has been emerging but in which some substantial questions remain open — including determining the neutrino masses once and for all.