The scourge of “terrorism” — for today’s purposes, let’s take the word to mean attacks on civilians perpetrated by individuals or by small, stateless groups — is a part of human existence going back as far as you want to look. If a person has what he or she views as a grievance, then attacking people who are loosely connected to that grievance, in order to kill and maim some of them and frighten the rest, is obviously one of the options, immoral and hideous as it may be. There’s nothing modern about the strategy of terror.

What’s new about terrorism in the modern world is science. Science, via the technology that it makes possible, is a great multiplier. It allows an individual, or a small group, to exploit power inherent in nature, turning a task that no human could perform, or that would take a cast of thousands, into something that can be done with ease by a few people, or even just one. Of course this multiplied power has many benefits for us as individuals and for society as a whole; think of trains, tunnel-boring machines, skyscraper cranes, snow-blowers, pneumatic drills, aircraft engines, power plants, and on and on. But it also poses many risks and challenges that we have to face, as individuals and as a global civilization.

I personally don’t think we can hope to eradicate terror; it’s too deeply ingrained in being human. The arms race between those who would carry out attacks and those who try to prevent them will never be won by either side. But every time the enemies of civil society develop a new tactic, it is important to respond by poking holes in it, to the extent possible. In fact it would be optimal to respond before that strategy actually gets used, though this never seems to happen in our culture. Still, better late than never, I suppose.

What is a pressure cooker? The basic scientific principle behind this device is very simple, and goes back at least as far as 1679. Denis Papin, a Frenchman (should we be surprised? bon appetit!), who was what we would today call a physicist and mathematician, is usually credited with its invention, though it didn’t become widespread until recent decades, when it became reliably safe for use in the home. I don’t know the precise history, but Papin, an expert on steam and its uses in engines, must have been among those who knew that under higher pressure, water boils at a higher temperature, as shown in the figure below. (Anyone who lives at high altitude, where the pressure of the atmosphere is lower than at sea level, knows the reverse is true; water boils at a lower temperature in Denver or Mexico City or Kathmandu than it does in New York or Shanghai or Cairo, so it takes longer to cook food in boiling water.) The hotter steam that emerges from the hotter boiling water can be used to cook food quickly and in a humid environment, keeping it moist. 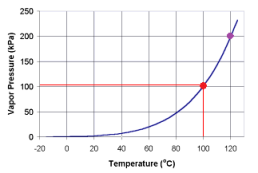 How water’s boiling temperature is affected by the pressure of the gas (typically air mixed with steam) above the water. At sea level, the pressure of air is about 100 kPa, and water boils at 100 degrees Celsius, as marked by the red dot; the violet dot marks the maximum pressure and temperature of steam inside a standard pressure cooker.

The challenge for using high-pressure, high-temperature steam for cooking is that if the pressure in a gas is higher in one region than another, then the gas will move, if it can, in such a way as to equalize the pressure. Indeed, when you boil water in a tea kettle, the cool air outside the kettle has lower pressure than the hot steam in the kettle, so the steam rushes outward. And this flow of steam can be exploited to blow a whistle, alerting you that the water is boiling.  So high-temperature steam won’t stay where you want it to, unless you lock it inside a container.

A pressure cooker, therefore, has to be sealed tight when it is being used. You put the food above some water in the cooker; you close it; and you turn on the heat. The water boils a bit, and some steam forms above the water. In a kettle, the steam would escape and cause a whistle; but since the pressure cooker is sealed, the steam has no place to go, so the pressure of the air and steam inside the pressure cooker goes up a bit. This in turn increases the boiling point of the water. But the heat is still on, so the water gets hotter, boils a bit, more steam emerges, and as it has nowhere to go, the pressure again increases. And so it continues, moving the water and steam along the blue curve shown in the figure, until the desired pressure and temperature are reached.

Many pressure cookers can safely handle a pressure which is double the pressure that the atmosphere itself exerts on us down at sea level.  (“Safely” means the seal won’t break until the pressure reaches much higher levels.)   As seen in the figure, doubling the pressure found at sea level increases the boiling point of the water, and therefore the resulting steam, from 100 degrees Celsius to about 121 degrees (i.e. from 212 degrees Farenheit to 250 degrees).

Note that doubling the pressure means that the pressure difference between inside and outside is about the same magnitude, but opposite in direction, as would be found between ordinary sea-level air and a vacuum — i.e., a container out of which all the air had been pumped.

Unfortunately the same tight seal that a pressure cooker requires is useful in multiplying the power of an explosive. The moment a material begins to explode, the chemical reaction it is undergoing creates high-pressure gases.  If the explosion begins in the open air, those gases begin to rush outward immediately. But if these gases are trapped — say, inside a pressure cooker — then they have nowhere to go, and so, in an instant, the pressure builds up. When finally the trapped gases are under so much pressure that they blast the containing vessel apart, they do so with a much more powerful explosion than would have occurred had they not been trapped. And of course, the broken pieces of the vessel, and any nasty materials stored inside the vessel, such as nails or metal balls, become deadly shrapnel.

It is unfortunate that a pressure cooker, a simple, useful and widely available device, based on such simple scientific principles, can be used just as simply to increase the killing power of a single vicious individual. And it’s even more unfortunate that terror networks have been encouraging people to use this method, without us doing anything to make pressure cookers more difficult to obtain.

But perhaps this tactic, at least, can be subverted?

To work properly, a pressure cooker needs to have a tight seal at 100 degrees Celsius and in the presence of steam.  The temperature and pressure build up slowly, over minutes. A bomber, by contrast, wants a vessel that has a tight seal at (initially) much lower temperatures, sustains that seal under a very rapid build up of pressure over a tiny fraction of a second, and does so even when there’s no substantial amount of steam, compared to other gasses released in the explosion. In short, the physical conditions encountered while cooking are very different from those in a nascent bomb.

So, inventors: can you design a pressure cooker that is safe and effective for cooking in the home, but has a seal that will instantly and completely fail if used in a bomb?

Of course, it’s not obvious a redesign is of much use. Perhaps there are many simple substitutes for pressure cookers that are only a bit more expensive and only a bit more trouble to obtain. But still, why make it easy for mass murderers?

Those in the United States will recognize some shards of irony embedded in this question.

This entry was posted in Physics, Science and Modern Society and tagged physics, pressure, terror. Bookmark the permalink.

36 responses to “Under Pressure”